By Laurel Stowell, reporter for the Whanganui Chronicle. 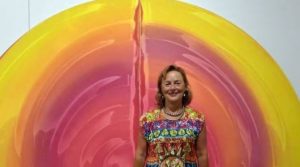 The last six years have brought one challenge after another for Sarjeant Gallery Trust Board chairwoman Nicola Williams – but she will not rest until the doors of a reborn Sarjeant open in 2021.

“Then it will be someone else’s turn,” she said.

Williams has been made a Member of the New Zealand Order of Merit for services to arts governance as part of the Queen’s Birthday Honours.

She’s proud and honoured, but said the honour could equally be about the importance of the project she undertook and the support it has had.

Brought up in Whanganui, Williams completed a Masters in Business Administration at Massey University and rose through the ranks in her mother Pam Williams’ Wanganui Seafoods business.

After it sold in 1994 she worked in international finance, consultancy, property development and sat on boards. In 2002 she moved to Taupō, chaired its Erupt: Lake Taupo Festival for eight years and was a district councillor from 2010 to 2013.

But Whanganui was always important to her, and in late 2013 when then-mayor Annette Main asked her to lead the Sarjeant into its earthquake strengthening and extension project, she decided not to stand again in Taupō.

That project has been her life for the last six years, and she bought a historic cottage in central Whanganui where she spends most of her time.

Williams had to convince ratepayers it was a worthwhile project because no benefactor wants to give to a project without local support.

She and Sarjeant director Greg Anderson took a six month roadshow across the region, talking to groups of all kinds.

When they had enough support they started knocking on benefactors’ doors. Much of the $35 million they raised has come from outside the region and some from overseas.

“We have been up and down the country and I have also been overseas, at my own expense. I have visited some of those people,” she said.

Williams enjoyed meeting “some incredible people” but also faced challenge after challenge – the latest a need for yet more money to meet increased building costs. She expects to get an answer to a major funding application this month.

It’s people’s belief in the project that has kept her going, she said, with the latest example being former Attorney-General Chris Finlayson QC agreeing to be on the Sarjeant’s board.

She wanted to thank her mother, who encouraged her to take the project on. And she said Greg Anderson had a fantastic team at the gallery, which has responded well to the transition between buildings.

Williams remains convinced the reborn gallery will deliver for the district – not just through art and education, but by attracting visitors and lifting Whanganui’s reputation.

Click here to see the origianl article at newzealandherald.co.nz