Posted at 05:00h in Media Releases by Officer
12 Likes
Share 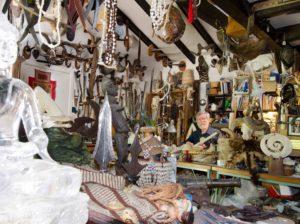 Owen Mapp studio portrait by Hanne Eriksen Mapp.
“When I started bone and ivory carving in New Zealand I was the first one.” Owen Mapp

Curated by Pātaka Art + Museum, Porirua, the exhibition, showing at the Sarjeant’s object gallery above the i-Site, features just under 200 works.

Mapp grew up in a family of farmers in the Waiau Valley and took part in an archaeological dig at the age of 14 at the Wairau Bar, an early Polynesian site – a formative moment.

Aged 18, and having “bombed out badly” in his School Certificate exams, Mapp went overseas and worked at a museum in Sweden, also at the British Museum and in Israel.

He travelled widely in the 1960s and on his returned home tried to get work in New Zealand museums, however his lack of formal qualifications proved a stumbling block, so he took up bone carving as a hobby, using whale teeth found in second hand shops.

“When I started bone and ivory carving in New Zealand I was the first one. There were a few jade carvers but nobody was interested in the materials then and I had the field to myself. I could go to a whale strandings and cut up whales without any legal problems.”

Mapp was also working as a set, prop and graphic designer at the New Zealand Broadcasting Corporation and the New Zealand Film Unit, and his archaeological interests and design background fed into his carving.

In 1972 he was offered an exhibition by a Wellington gallery owner, Elva Bett, and sold all his works. Mapp then focused on developing his career in bone carving and quickly established himself through regular exhibitions.

Mapp expresses reverence for the ancestors and for the cultural, spiritual and artistic/craft legacy to which he is connected. He is a New Zealander of Scottish, Irish and Welsh descent who is strongly influenced by Maori designs.

He has had support from Ngāti Porou kaumātua and kuia who taught him about Māori culture and carving, including Selwyn Hovell, Bill Kerikeri and his wife Mihi in Wellington, and master carver Pineamine Taiapa from the East Coast.

“I believe in the magic or spirit of carving [and] see myself as a South Pacific carver influenced directly by my culture and surroundings. I look back to the ancestors. If you don’t know your past how can you know your future?

“My philosophy is holistic. If I am working with bone or ivory I like to know the animal it is from and its surroundings. If you know that from an archaeological point of view you can read the bones.”

Accompanying the exhibition is a catalogue that includes photographs taken by Mapp’s Danish wife Hanne.

Sheffield House Publishers commissioned one of the figures, a carving of a taniwha and dragon, for a book cover.

Mapp explains the composition and symbolism “It’s a yin/yang composition of a Welsh dragon and a taniwha.

At the centre are a feather quill and a woodcarving adze, representing peace, education and cultural richness.

Mapp says he makes things to last at least 1000 years. “I am attracted by ancient artefacts and attempt to translate their influences into contemporary concepts of lasting quality by creating a timeless object.”

Mapp was recently awarded the Companion of the New Zealand Order of Merit for services to Māori carving and bone art.

Owen Mapp’s exhibition Dragons & Taniwha – 50 Years an Artist Carver is on at the Sarjeant’s i-Site gallery at 31 Taupō Quay until March 29, 2020.

Click here to see the original article at the newzealandherald.co.nz