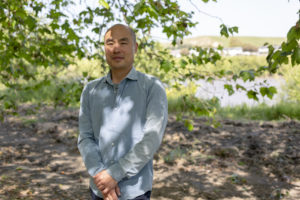 New Tylee Cottage artist-in-residence, Jae Hoon Lee, drove into Whanganui for the first time two weeks ago. His first impressions of Whanganui were the clarity of the light and the smell of roses, both auguring well for his three-month stay.

Lee who was raised in Seoul, Korea, has lived in Auckland for 20 years. He is a full-time artist and has exhibited widely across New Zealand, Australia, Korea, China, Singapore, Germany, the Netherlands and the United States.

He studied at the University of Auckland’s Elam School of Fine Arts, graduating with an MFA in 2003 and a Doctorate of Fine Art in 2012.

Lee is already collecting images for his residency project in Whanganui, which he says is broad in scope.

“I collect many images of natural elements – that could be clouds or the surface of water; textures. The first thing I did in Whanganui was to walk around the riverside. I am thinking of getting a drone with a camera and taking some aerial shots of the spiral of the river to do a collage. I have also been looking at the sky every day and I go to the hill behind the cottage where the Sarjeant Gallery is and I can have a clear 360-degree view of the sky. Last evening I went to see the sunset with my camera – it was such a beautiful night.”

Lee travels widely, taking many photographs when he arrives in a new place. He downloads the photographs onto his computer in Auckland then “stitches them together” to make digital collages of a new landscape. 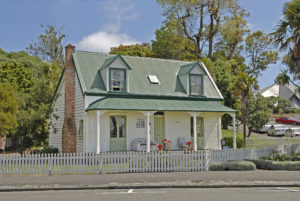 During travels in Nepal and in particular in the Himalayas, Lee created an image, Annapurna, that appeared in Christchurch on the Worcester Boulevard Springboard as part of Outer Spaces, artworks shown in spaces outside and above the exhibition galleries.

“If I am in a mountain landscape like Nepal I do very close up shots in high detail sort of randomly. Then I collage them randomly on my computer screen. So I create new scenery out of this collage process – something new that I have never seen before.”

While there is randomness in his artistic process, Lee says, “there is a rhythm going on in the centre. It’s an ongoing thing – kind of like your style. It’s like a poet when they write poetry. A lot of artists have their own style and follow their own rhythm. So I follow my own rhythm – and of course there is some order, it’s not total disorder. There is a certain form.”

Lee was also the Antarctica New Zealand Arts Fellow in 2011 and won the Wallace Arts Trust Paramount Award in 2013, including a six-month residency in the International Studio and Curatorial Program in Brooklyn, New York City. In 2014 he was awarded the Asia New Zealand Foundation’s Cemeti Art House Residency in Indonesia.

During his time in Whanganui, Lee says, along with photography he is thinking of doing something different, such as exploring an interest in working with clay.

“This is maybe a turning point for me. I am thinking I have made images for the last few years focusing on quite similar subject matter and style with my digital collage method so I would like to expand while I am here. I have met some local artists here – great glass artists and ceramic artists. I am interested in trying out a little bit. I couldn’t be a potter, it takes a long time, but I like material – so [I will] touch clay instead of a [computer] mouse. My time in Whanganui should be fruitful and rich.”

Lee will exhibit his new work towards the end of 2020 at the Sarjeant Gallery.

Click here to see the original article from the newzealandherald.co.nz