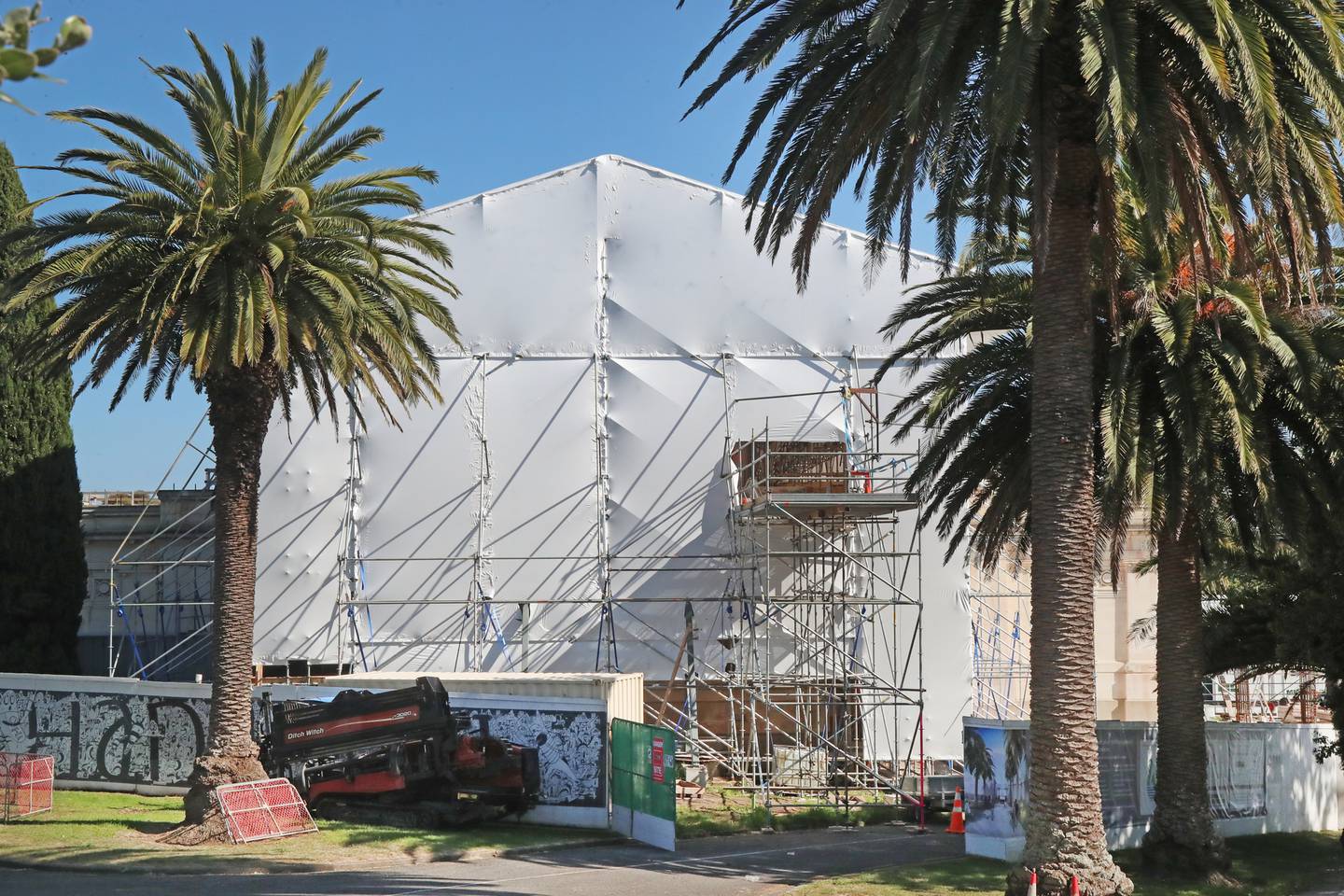 The Sarjeant Gallery redevelopment will take on a distinctly different look after granite with splashes of shiny steel was chosen to clad the new extension wing at the site.

Whanganui district councillors unanimously endorsed the new co-design and cultural narrative for the Sarjeant’s extension at an extraordinary meeting held in chambers on Tuesday.

Councillors had been told of the design changes at a workshop last week and the redevelopment’s project director Gaye Batty had revealed back in June the Oamaru stone was not up to standard for what the building needed.

The new design will cost $750,000 more than what had been budgeted, but that comes out of a $1.9 million contingency budget.

That means the new cladding does not add to the current expected total price of the project, which is $64.4m.

Batty said the process of choosing the new stone for the facade was robust and had other advantages.

“The granite chosen meets the strength and seismic specifications required by the building code.

“It’s readily available, the manufacturer builder is confident of delivery within the construction programme provided the materials required are procured at the end of August.”

Batty said it was seen as an opportunity to try a more collaborative process to reflect the culture and rich history of Whanganui and mana whenua.

Designed by an artist group appointed by Te Rūnanga o Tūpoho along with architect Ralph Roberts of Warren & Mahoney, the exterior of the new wing, Pātaka o Sir Te Atawhai Archie John Taiaroa, will now contrast with the white of the 104-year-old original Sarjeant Gallery building it will sit alongside.

Batty said the shiny steel “Tioata” inserts will give the building the effect of light shimmering on the water, a feature that can be seen on the Whanganui river referred to as kānapanapa.

“The stone panels will be trapezoidal in shape, formed into pattern known as aramoana unique to Whanganui using honed and polished stone finishes to create contrast and shadow to symbolise the pathway from awa to the sea,” Batty said.

She said the new proposed design was a big departure from what the project had started with. 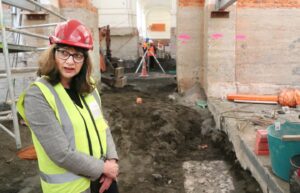 In light of the use of $750,000 from the contingency fund to cover the new facade, Batty was asked by councillor Philippa Baker-Hogan whether she was confident that the backup fund would last.

“There may also be items that come about that we will discover still within the old building,” Batty said.

She hoped by February or March next year she would have a better idea of how the contingency fund would hold up.

Risks to the costs that needed to be worked through included a delivery of Gib board as well as the end of Covid and illness disruptions to time and supply concerns.

“So they’ll move from a risk item to a known variation and we’ll be able to have a better indication to how close we’re going to get to expending the contingency.”

There is still a shortfall of $9.4m needed to fund the redevelopment and Batty expected a newly elected council later this year would get an update as to how fundraising for that was going.

Councillor Rob Vinsen asked Batty how confident she was the $64.4m would be the final price.

“There is still uncommitted contingency within the $64m envelope that will hopefully see the project through to completion.”

He said as time goes on more unknowns are figured out and the risk for extra costs is diminished.

“At this point in time the project looks good to make it to completion on the revised budget but we could lift the lid off for something tomorrow and discover something that nobody anticipated.”

Councillors and the mayor were delighted with the distinct change in the extension’s appearance and how it would look sitting next to the neo-classical look of the original gallery building.

“This opportunity to re-clad has given us a chance … to have one of those great eye-catching buildings just like Bilbao,” Mayor Hamish McDouall said – referring to the Basque city’s world-famous Guggenheim Museum.

“Maybe not as eye-catching as Bilbao. But what about Len Lye just up the road? I think this will be a match for that.”

He said he feared cutting the ribbon on this project and thinking “meh” when looking at the building. 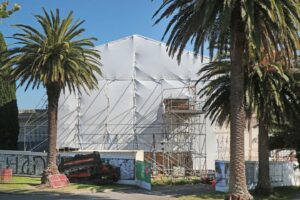 Work continues on the original Sarjeant Gallery building. From this view the new wing sits behind it. Photo Bevan Conley

“There will be no chance of people doing that with this design.”

Councillor Helen Craig said she hoped the community embraced the new design as a positive thing and that “keyboard warriors … give it a rest”.

“I’m pleased the Oamaru stone didn’t work out in the end.

“Nobody likes prices to go up but at the end of the day this is a far better outcome … for the exterior of the building and it will set it apart from what was originally the concept.”

Councillor Josh Chandulal-Mackay reminded councillors the decision to underwrite the project back in 2017 led to $40m in external funding from central government.

Vinsen said even if the amount paid by ratepayers towards the project doubled it was still a good deal.

“If the ratepayer can have this wonderful building for $10m – this is a wonderful thing for our community.”

Councillor James Barron said they had gone from what was a “large beige box” behind the old Gallery building to something entirely different.

Deputy mayor Jenny Duncan talked about the “view shaft” from Maria Place and how Te Pataka would not be able to be seen from the middle of town.

“So we’re still going to have that classic view.

“But then when we come around to the new entranceway we’re going got have this amazing juxtaposition of the new and the old.”

Councillor Graeme Young wanted to acknowledge the work of the Sarjeant Gallery Trust for its work in significant fundraising for the project.

This article first appeared in the Whanganui Chronicle and NZ Herald online on August 24, 2022