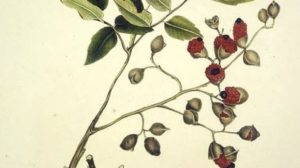 With the Centenary of the Sarjeant Gallery just passed, it is perhaps timely to look back at some of the early artistic connections to Pukenamu Queen’s Park Reserve that preceded the opening of Sarjeant Gallery in 1919 and to see how the gallery came to be located there.

Pukenamu’s location and prominent elevated position have engendered longstanding and intimate Māori cultural connections. It is the site of a pre-1840 pā and urupā both of which were on the high-ground overlooking Pākaitore and the Whanganui River. The first Pākehā settlers who arrived in Whanganui in 1841 brought with them their Victorian cultural practices, including a love for the arts.

Queen’s Park was first mapped as a public reserve by the New Zealand Company in 1842. The significance of the Reserve, its location, and its vistas were commented on by Samuel King in the Wellington newspapers in May 1843. “But suppose, Mr. Editor, you accompany me to the Queen’s Park — our Acropolis …’, ‘…, from its position in the very centre of the town, and its command of ocean, earth, and sky, must be a place of frequent resort.”

Samuel had no idea how prophetic his words would become as the Reserve is now our Acropolis, the civic and cultural heart of the District, and it has also become the traditional and spiritual home of the artistic community in Whanganui.

The Reserve was an ideal site for the Rutland Stockade which was built and occupied by the British military from 1846 until 1870. The first military garrison included several amateur artists such as Commissariat Officer W. Tyrone Power who wrote and illustrated a book in 1849, “Sketches in New Zealand, with pen and pencil”. The cover image was a sketch of Whanganui with the Rutland Stockade and the Reserve being the prominent features. Thomas Bernard Collinson, later a Major General, was the Royal Engineer in charge of the construction of the stockade and like Power he also sketched and painted Whanganui and the Reserve. Today Collinson is internationally renowned for his excellent early survey work and detailed sketches of an embryotic Hong Kong Harbour. 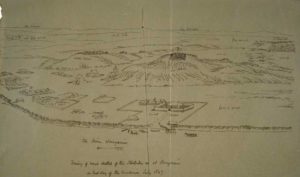 Tracing of rough sketch of the stockades etc at Wanganui July 1847.

From the early 1880s the Reserve was increasingly used as a place for educational, artistic and musical purposes and as a site for military commemoration. The Volunteer Drill Hall, constructed in Maria Place in 1879, was the preferred site for many art exhibitions due to its size and location. In 1880 the government gifted a section of the Reserve fronting Ridgway St for a public library which opened in 1882. The intention was that the new public library, now Repertory Theatre, would eventually become a site for both a public museum and an art gallery with the addition of two wings and possibly a second storey at a later date.

In 1893 the Soldiers Monument (Lion Monument), sculptured by local artist George Sherriff was unveiled on its original site at the rear of the Sarjeant Gallery. Following the precedent set by the Public Library, the Public Museum was opened in the Savage Club building in 1895. However, there was little physical change in the Reserve until the bequest of Henry Sarjeant in 1912 which enabled the hopes and ambitions of Whanganui’s artistic community to be realised with the construction of the Sarjeant Gallery and the purchase of an extensive internationally renowned collection.