05 May Reseachers add to story of Whanganui artist Charlotte Hardcastle

Posted at 14:20h in Art in Isolation: The Sarjeant Lockdown Blog by Officer
14 Likes
Share 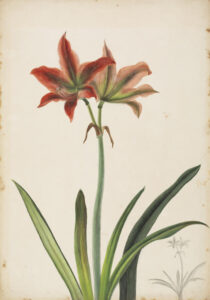 When working with historic collections one often comes across items that are a mystery.

It becomes a balancing act between the time and resources required to conduct exhaustive research and learning to accept that in some cases we may never know the answers.

Within the Sarjeant collection is a group of six beautifully rendered botanical works by Charlotte Hardcastle (1828-1908). Little was previously known about Charlotte, or the circumstances under which her works entered the Sarjeant collection, and thanks to recent research by Professor Michele Leggott and her team at Auckland University we now know considerably more about this early New Zealand artist.

Charlotte Hardcastle was born in Abingdon, UK, and during the 1850s and 1860s exhibited flower and bird studies at the Royal Society of British Artists, the British Institution and the Royal Academy. Charlotte emigrated to Australia in 1868 where she married her cousin Edward Hardcastle (c.1836-1886), following which they settled in Hokitika, New Zealand, where they had two children, Edward and Kathleen.

The family moved to Whanganui in 1877 when Edward was appointed resident magistrate.

alongside Emily Harris who also exhibited. The exhibition was organised by the newly-established Whanganui Public Library and held in the Princess Theatre. Charlotte’s exhibited works were enthusiastically reviewed in the newspaper: “(72) is a full sized brace of French partridges, hung against the deal lined wall of a larder. If the frame of the picture had been away, we should have thought both birds and boards were real. … look at Flowers (74) and make up your mind whether the drops on them are really drops of water, or wonderful little transparencies, the effect of two or three clever touches of the artist’s brush”. (Wanganui Chronicle, 23 Aug 1877)

The Hardcastles later moved to Wellington and then Nelson where Edward died in 1886. By 1902 Charlotte and her daughter Kathleen were back in Whanganui where Charlotte died in 1908 and Kathleen remained until her death in 1932. It is possible that the six botanical works were gifted to the Sarjeant Gallery by Kathleen after her mother’s death. As far as we are aware these are the only works by Charlotte held in a NZ collection.

To view Charlotte’s works visit Explore the Collection on the Sarjeant website. To read more about Emily Harris visit https://emilycummingharris.blogs.auckland.ac.nz/

This article first appeared in the Whanganui Chronicle and NZ Herald online on 21 April. To view click here.