Rachel Rose: Time to put brazen deceit behind us and recognise the man who designed Whanganui’s most iconic building
23172
post-template-default,single,single-post,postid-23172,single-format-standard,bridge-core-3.0.2,qodef-qi--no-touch,qi-addons-for-elementor-1.5.4,qode-page-transition-enabled,ajax_fade,page_not_loaded,,vertical_menu_enabled,side_area_uncovered_from_content,qode-child-theme-ver-1.0.0,qode-theme-ver-28.8,qode-theme-bridge,disabled_footer_top,qode_header_in_grid,wpb-js-composer js-comp-ver-6.9.0,vc_responsive,elementor-default,elementor-kit-27794

Rachel Rose: Time to put brazen deceit behind us and recognise the man who designed Whanganui’s most iconic building

24 Oct Rachel Rose: Time to put brazen deceit behind us and recognise the man who designed Whanganui’s most iconic building

Posted at 16:36h in Gallery News by Officer
10 Likes
Share 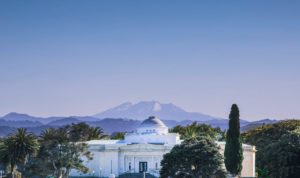 In October 101 years ago, families the length of New Zealand were learning that their beloved sons, husbands, brothers and sweethearts were never coming home from the foreign fields in which they fought. October 12 slipped by two Fridays ago, the day we hunkered down as the southerly roared in and temperatures plummeted.

One hundred and one years ago that day, Donald Hosie was one of 843 soldiers in the New Zealand Expeditionary Force who died at Passchendaele. Pour over the cramped copperplate handwriting of his service record and one gleans the brutal reality of that horror-filled day: Donald is officially “Missing Believed Killed” because his body was never found. He likely died from the direct impact of a shell and there was no body to find or identify.

Whanganui should know the name of Donald Hosie because this 21-year old trainee architect designed our city’s most iconic building. Yet he receives no official credit and the Sarjeant Gallery foundation stone bears the name of his employer, due to a sustained and brazen deceit nearly a century ago. It’s time the Sarjeant Gallery put that to rights. I first heard this story from local historian Kyle Dalton during one of the historic walking tours he was leading a few years back.

It goes like this: Hosie’s outstanding entry into the competition to design the Sarjeant Gallery is declared the winner. He works for Edmund Anscombe, a notable Dunedin architect, who promptly claims Hosie’s work as his own and maintains that lie throughout an extensive investigation. Competition judge S Hurst Seager travels to Dunedin to interview Hosie and Anscombe. He learns in a private meeting with Hosie that the work was Hosie’s own, done on his own time with no input from Anscombe. But Hosie declines to press his authorship, not wanting to displease his boss. Anscombe maintains that the design was his and his apprentice had simply drafted the drawings based on his instructions. His claim proved tenuous under questioning by Seager, who declared to the council that Hosie was indisputably the author.

Kyle thinks that the councillors of the Wanganui Borough Council had some reservations about their illustrious new gallery being designed by a student, rather than an established architect of renown. It may have suited those conservative men to have Anscombe’s name attached to the gallery — he was already well-known, an elected fellow to the New Zealand Institute of Architects and had recently been appointed architect to the University of Otago. Legal opinions were sought and the council settled on naming Anscombe as the architect despite the evidence. There was little financial reward in drawing up plans for new civic buildings; the money was in the subsequent appointment as the onsite architect during a building’s construction. Hosie wasn’t available for that job anyway given the momentous events a world away.

He was the youngest of nine children born to Scottish parents in Central Otago. Donald was 19 when World War I broke out; he tried to volunteer early on but was judged unfit because of his poor eyesight. But as the war dragged on, the need to reinforce NZ companies decimated by fighting in Gallipoli and the Somme was urgent — and Hosie was “a fine manly type of young fellow who is anxious to go to the war”, according to Seager’s approving description. In August 1916, his previous rejection was noted, along with his poor eyesight, but he was ruled fit to serve. By November he was in uniform and in training.

Anscombe got the reward both ways: employed to oversee construction and recorded in history as the architect. It is his name etched into the gallery’s foundation stone, perfectly legible a century later. But it was Hosie’s own hand that drew up the preliminary studies for the Sarjeant, drawings Seager described as a “beautiful … [showing] evidence of the greatest skill in design”.

An appeal was made all the way up to New Zealand’s major general and Hosie was accordingly given leave from camp in order to complete the detailed drawings required for construction. Hosie had said privately to Hurst Seager that he was not pressing his case for recognition as architect because “he was a young man and would have his chance again”. He sailed for Europe in March 1917. He was in France for just three months before his brutal, bewildering death. Construction of the Sarjeant Gallery extension begins next year. It would seem fitting to then correct this long-standing injustice, by noting Donald Peter Brown Hosie’s contribution to the original building in some suitable, public way.

I’d like to see a small permanent exhibition that includes some of his beautiful drawings for the buildings.

Biographical accounts of Anscombe tip-toe around his sustained deception. His conduct was despicable — there are many aggravating details there is not room to include here — and what Hurst Seager called his “mean trick” should not continue to be politely ignored. Hurst Seager declared Hosie was “indisputably an architectural genius”.

We can only imagine how Donald Hosie’s talent would have shaped the built face of post-war New Zealand.

World War I was a personal tragedy for all whose lives were destroyed or forever altered. It was also a tragedy for society, a gaping tear in the cultural fabric of nations.

We will never know what we lost, what vision and genius and goodness would have arisen, were it not for the destruction of this senseless war.

Rachel Rose is a Whanganui-based writer with a BA (History) from VUW. She would like to hear from any descendents of Donald Hosie: www.facebook.com/rachelrose.writer