By Staff Reporter at Whanganui Chronicle 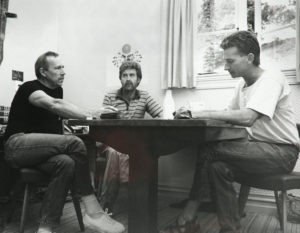 Inaugural Tylee Cottage artist in residence Laurence Aberhart has returned to Whanganui for a second stint at Tylee.

Aberhart, his partner and three children lived in Whanganui for a year in 1986. During that time Aberhart photographed many well-known Whanganui buildings including the Sarjeant Gallery, Savage Club, many town civic and commercial buildings and private homes. His work from that period and from the region is widely known and the Sarjeant Gallery holds many of the works in its collection.

Aberhart is now recognised as one of New Zealand’s most technically proficient photographers and committed visual artists. His photographs are exhibited and collected throughout New Zealand and internationally.

Aberhart, who now lives in Russell, is the first of the Tylee alumni artists to return to Tylee Cottage, with his latest residency from March 5 to March 29. The residency has hosted more than 60 artists.

The Tylee alumni residencies will ensure that the relationships established with artists continue into the future. Long-standing relationships with artists are important to galleries as they ensure ongoing artistic connection to the community, the gallery and the collection in the form of engagement, exhibitions, programme events and acquisitions, Sarjeant Gallery curator and public programmes manager Greg Donson said.

“During his year in Whanganui Aberhart produced photographs that have now become key images in his oeuvre,” Donson said.

“We are extremely fortunate to have many of these beautiful images in our permanent collection and we’re looking forward to seeing what sites Laurence might re-engage with during his time here.

“There are not many cities that can boast having such a skilled photographer document them; many of the sites that Aberhart visited in 1986 have remained but many others have disappeared or been radically altered.”

The residency is a key component of the Sarjeant’s ongoing focus on photography in its programming and collecting that began at its inception when photographer Frank Denton amassed an impressive collection of international pictorial photography.

The residency scheme, originally funded by the Arts Council of New Zealand, was established to encourage and support artists to further their work and practice, and also for them to engage with individuals and organisations in and around Whanganui.