‘Hang on a minute’: Tradie stumbles on 103-year-old time capsule in gallery wall 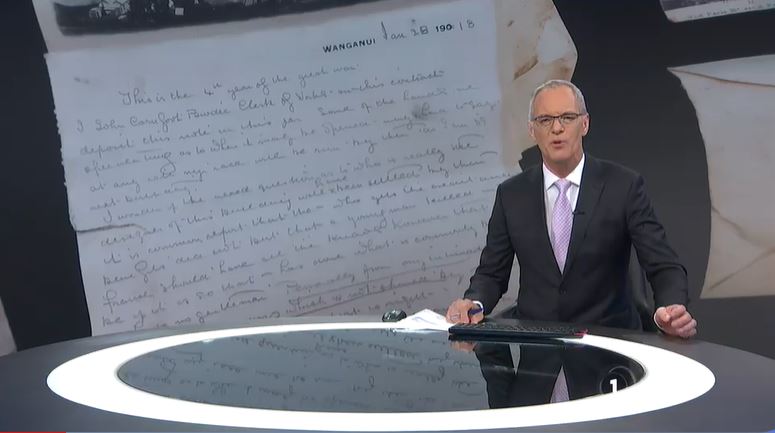 It was just another day for Richard Awa, drilling holes through the roof of the Sarjeant Gallery as part of the strengthening project for the category one heritage building in Whanganui. 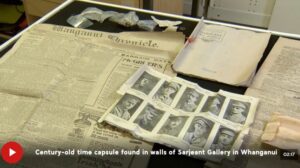 Click the image above to view the TVNZ story

The tradie working on the strengthening of the heritage-listed building that made the discovery is calling it fate. Source: 1 NEWS

He felt the drill drop into an unexpected space between the walls below, where there should have been concrete.

“We’ve got to investigate that,” he told 1 NEWS.

Directly below in the gallery where the drilling had occurred above, another hole was created in a nearby wall to find the space.

Awa put his hand in the hole, removing what he thought was rubbish.

“Realised straight away soon as I grabbed it that, ‘Aw hang on a minute, that’s not rubbish’ so we’ve carefully removed what it was and discovered all the treasure.”

He had discovered the contents of a makeshift time capsule left by the Clerk of Works during the gallery’s construction in 1918, John Cornfoot Brodie.

The drill had smashed the glass jar which was placed in the hole with the items contained within.

“Because we drill with water I would have thought the water would have damaged the papers but no, perfect condition,” Awa said.

He said it was “pretty up there” on his “cool list” for experiences in the many years he’d worked as a construction supervisor.

“We were just so excited, we didn’t expect to find anything like that.

“There was no record that there was a time capsule and also, I think the deeply personal nature of the material in the time capsule is just so exciting to hear about,” Sarjeant Gallery curator Jennifer Taylor Moore said.

The collection of 17 items includes a postcard from John Brodie’s son who was fighting in World War One, a booklet outlining requirements for entrants submitting a design for the construction of the gallery building, sycamore tree seeds, local newspapers marking the laying of the Sarjeant Gallery foundation stone and a letter revealing what was on his mind.

“This is the 4th year of the Great War,” he wrote at the top of the letter.

He wonders when the capsule will be found, writing “At any rate my race will be run then as I am 59 next birthday.”

The main reason for Brodie’s letter was to make sure the true architect of the gallery was known in the future.

He wrote, “A young man killed in France should have all the honour.”

That was 21-year-old Donald Hosie.

Hosie’s boss Edmund Anscombe claimed the credit at the time for the building’s design.

Many in Whanganui were aggrieved by this injustice including those working on the building’s construction, especially when Donald Hosie died at Passchendaele just three weeks after the wrong architect’s name was etched on the foundation stone.

“During the course of the building work he would’ve had to go back and talk to the architect on a regular basis and obviously from his letter it becomes clear that he was concerned that the architect he was talking to wasn’t the one who came up with the design and so he was really concerned that no one would know that and he wanted to make sure that personally, that the right person got the acknowledgement,” Sarjeant Gallery curator Jennifer Taylor Moore said.

“I find that’s pretty cool that I’ve found it and been able to get his message out there,” construction supervisor Richard Awa said.

The temporary Sarjeant on the Quay gallery will now exhibit Brodie’s time capsule collection while the original gallery is redeveloped.

“What is quite special about this discovery is finding out more about John Brodie who left this time capsule, is that we found out that his granddaughter is Joan Grehan and her exhibition we held in 2014 was one of the last exhibitions that we had at Pukenamu Queen’s Park and it was just adjacent to where we found the time capsule in the building so it was quite special,” Taylor Moore said.

The curator is now working to find descendants of John Brodie to let them know what he had left in the gallery’s walls more than a century ago.