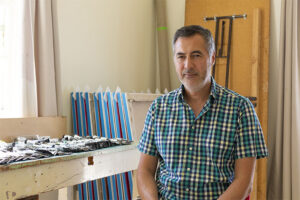 Tylee Cottage Resident artist Graham Fletcher has revelled in his time spent exploring Whanganui, collecting fresh visual material that will feature in paintings for an exhibition at the Sarjeant Gallery about the middle of next year.

The Dunedin-based artist and principal lecturer at the Dunedin School of Art said his proposal for the residency expressed an interest in local architecture, and in doing research on pattern, decoration and ethnographic objects.

His paintings to date blend the disparate elements of modernist interiors and still life with ethnographic objects, modernist art objects and architecture.

But proposals tend to change and Fletcher found the sensory experiences of being in Whanganui did just that.

“I found that the big change for me when I got here was the landscape. I’ve enjoyed the river very much, it’s such a key feature, [including] some early images of the river, when the town and buildings weren’t really here.”

He also admires Whanganui architecture, in particular the older buildings, St Mary’s Church and the former Wanganui Departmental Building, 133 Wicksteed St, a brutalist design by the Ministry of Works.

“It’s a fantastic building, I’ve taken lots of photos of it. These are the sorts of things that will start to feature in the work. I like walking down the main street – the buildings remind me of Dunedin a lot, in fact the similarities to Dunedin are quite uncanny [where] the historical buildings are being done up,” Fletcher said.

He has been a frequent visitor to the museum, drawing ethnographic objects to add to his treasury of images, and walks on Castlecliff ‘s raw, west coast beach, watching kite surfers on a windy day remind him of Muriwai or Piha from when he lived in Auckland.

He has collected various pieces of driftwood, leaves, stones and other objects, with which he toys while waiting for paint to dry.

In the Tylee Cottage studio 12 canvases were under way. Some backdrops in the paintings are of Virginia Lake where he also enjoys walking. 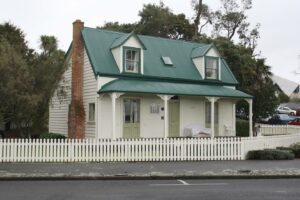 The paintings are in the early stages and Fletcher is grateful he has an extra month to work, gained through the Lillian Ida Smith Award, funded by the legacy of the Whanganui music teacher who had a keen interest in the arts.

“It’s slow. I use the paint straight out of the tube so it does take longer to dry.

“I like a very dark ground then as I build up the colours they get brighter and brighter. I try and paint seamlessly so the different elements look like they belong together in the work.”

He will add elements such as architecture, museum objects and other images, using collages of drawings to work out placement and composition before painting them onto the canvas.

“I cast my bet net very far and then connections happen in the studio when I’m sitting down – it’s like a puzzle, and it’s also a lot of my personal interests,” Fletcher said.

“I’ve always had an interest in material culture like primal tribal artefacts and they started to feature in my work around 2010 – seeing them in museums and overseas as well – the skill and the craftsmanship.

“The idea of painting these things in modernist spaces there is a strange tension that comes out of that. That mid-century modern period is I think a period people like to look back to. It’s like the objects have been re-contextualised in some way. If you think of their original function they have probably been repurposed as a decorative object.”

Fletcher has been a practising artist since 1997, exhibiting nationally and internationally. His work to date as a New Zealand-born Samoan has explored complex cultural issues within a post‐colonial context.

These ideas formed the basis for further research and in February 2010, he completed his Doctorate of Fine Arts at the University of Auckland.