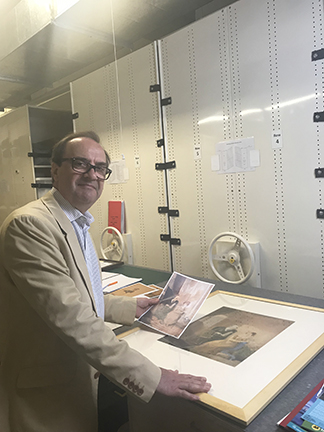 The Sarjeant Gallery’s collection is multi-layered and worth much more than the fluctuations of fashion and market trends. The layers contain a priceless visual record of aspects of Whanganui’s history, the social fabric and tastes of the community that the Gallery served. So when Nick Lambourn, Head of Department, Topographical Pictures of Christie’s auction house in London paid a recent visit it was for a purpose that only the Sarjeant could help him with. 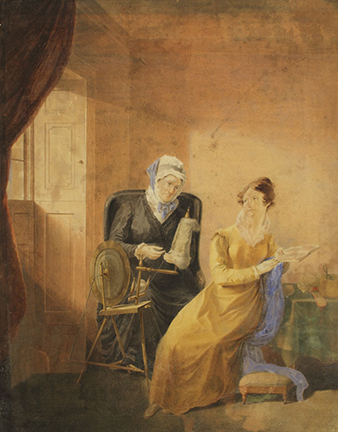 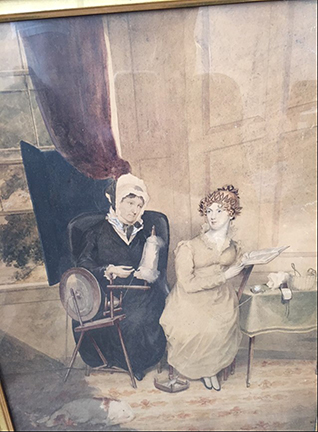 Mr Lambourn was researching a painting by John Alexander Gilfillan that will be included in Christie’s annual topographical auction later this year. Topographical art is work done by artists in countries outside Europe. Christie’s Gilfillan water colour of two women spinning fabric by a window is almost identical to that held by the Sarjeant. Mr Lambourn wanted to compare the paintings to determine the identity of the women.
“It’s rather intriguing because we think it’s a portrait of Gilfillan’s mother and, in the one you’ve got here, of his first wife [Sarah Murray]. We are wondering whether it’s his second wife he has painted in a second version of the same composition or another version of his first wife. We are trying to work out that puzzle,” Mr Lambourn said.

John Gilfillan was an itinerant artist who worked in Australia and New Zealand after teaching art in Scotland. In 1845 he began to farm at Matarawa, and near Putiki Pa, became friendly with local Maori and made many drawings. In 1847 young marauding Maori travelling through the district killed his wife and four children and seriously injured Gilfillan and his eldest daughter who later resettled in Australia.
https://collection.sarjeant.org.nz/persons/9045

“The Gilfillan is from your local material but of course the Sarjeant’s range is much wider and has great Victorian pictures, modern British, a few old masters so it’s a much bigger picture than just the regional interest, and that’s why we come here. It’s an extraordinary collection for a small centre, something to make the most of and to look after.”

Works of note include Edward Burne-Jones’s, The Fountain of Youth – an excellent companion to the version held by the Tate Gallery, which is monochrome and less fully realised; Curiosity by Eugen Von Blaas; Frederick Goodall’s Flight into Egypt; ‘A Greek Water Carrier in Egypt’ William Richmond’s and The Wrestlers, a replica by Raffaello Romanelli. “The works here haven’t moved around or been in the limelight so much because of the tyranny of distance, which makes them more interesting.”

Whanganui was one of the major centres in the past and the Sarjeant’s collection of over 8000 works reflects the city’s historical importance. This explains why the collection is on a par with those of the major centres such as Dunedin, Auckland and Christchurch said Sarjeant curator, Jennifer Taylor-Moore. “One of our points of difference is having a large, regional collection in a smaller centre.”

Mr Lambourn has visited the Sarjeant five times since his first visit to New Zealand in 1994. He made an immediate personal connection with the collection, excited to discover a portrait by John Collier of the famous painter Sir Lawrence Alma Tadema. “That was really interesting for me because part of my family married into his family. Anyone who comes to New Zealand will find connections with something personal.”

And he considers the iconic gallery that houses the collection is “a beautiful building, classic architecture with beautiful wooden floors on a historic site.” He has seen the evolution of storage conditions from the brick basement in the Sarjeant, typical of Christie’s and galleries in earlier times, to the temporary premises on Taupo Quay. “It’s wonderful to see, even in this temporary home how wonderfully well you have done. Everything is so much easier to access. When doing evaluations you just pull out racks.”

He said oil paintings are fairly robust but paper based artworks are more vulnerable to humidity. The new, enlarged, climatically controlled conditions of the redeveloped gallery will create the optimum environment for the collection and the increased gallery space provide more exhibition room. “It is really exciting because you have a great collection and it needs more space for hanging. Usually only a tiny percentage of a collection is exhibited at any one time and when members of the public want to see your pictures I think they have a right to see as much as they can within reason. The new building will make the collection more accessible.”

The temporary storage is an indication of what storage in the redeveloped building will be like said Ms Taylor-Moore. “It will be bigger with more racks and will allow room for more growth. We are a bit cramped here.” Larger, improved storage space already allows her to show people around the collection store, which they were unable to do in the building on Queen’s Park because of hazards. This will improve when the collection is housed again in its rightful place.

Art of course has a price tag attached and market values fluctuate according to trends and fashions. At present post-war, contemporary art dominates the market. “Victorian painting is doing OK. It was seriously out of fashion in the 1960s and ‘70s but came back into fashion in the 1980s. They are quite glamorous paintings, some of the Pre-Raphaelites and high Victorian artists like Goodall and Tadema who is the most expensive Victorian artist. The old masters are steady and just chug along.”

But for the Sarjeant keeping up to date with market values is more useful for insurance purposes. “There is a three yearly revaluation of the collection to ensure that we are adequately covered,” said Ms Taylor-Moore.

“The importance of the collection is that it is part of the history and social fabric of the area – what it can tell us about the artists, the techniques they used and also about the people, and the stories associated with them. The works the Sarjeant has acquired give an insight into the taste of the time and what people thought was important. A lot of it is to do with Empire and Commonwealth and reflects the more conservative regional taste of colonial New Zealand.”

Local families also discover connections with artworks in the collection just as Mr Lambourn did so there are opportunities for an ongoing dialogue with the community. “The way the collection was built up tells us a lot about the community that the Sarjeant was in, there are so many layers to the story.”

Footnote: Christie’s was founded in 1766 by James Christie. He held a sale in his “Great Rooms” on London’s Pall Mall. His first auction included a pair of sheets, two pillowcases, two chamber pots and four Indian glassworks. The following year, he held the first of many future auctions that were devoted entirely to pictures. The auction house has records of every sale, seller and buyer. Items sold by Christie’s have stenciled references on the back and the records can be accessed through Christie’s archive.