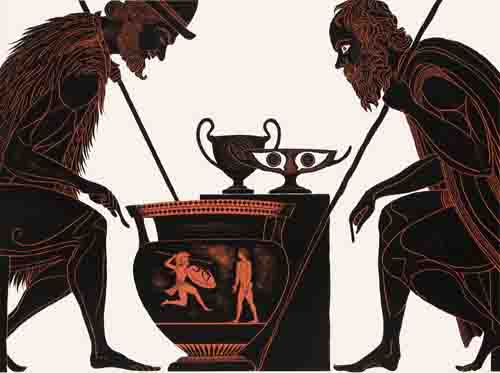 Marian Maguire, The Dialogue of Titokowaru and Socrates, 2010

Titokowaru’s Dilemma represents the culmination of three years worth of research and print making by Marian Maguire, who is one of New Zealand’s most accomplished printmakers. Having begun the research for this body of work in August of 2008, Maguire used her six week tenure as artist-in-residence at Tylee Cottage in 2010 to further research the project and visit notable historic sites in the Whanganui and Taranaki regions. Although work on Titokowaru’s Dilemma began at Tylee Cottage, the production of the final suite of work was undertaken at Maguire’s Christchurch print studio.

Dr Elizabeth Rankin’s engagement with the three suites of prints which form the exhibition brings to light the themes that underpin Maguire’s new work:

The protagonist of Titokowaru’s Dilemma, is an impressive figure who embodies the complexities and contradictions of nineteenth-century New Zealand history. Titokowaru was a trained Maori tohunga but a Christian convert; an advocate of peace but an outstanding military strategist; a powerful and charismatic leader but one who lost the support of his followers. Rather than simply confusing us, these diverse characteristics offer a more nuanced understanding of Titokowaru than we might have of more conventional early New Zealanders. And it was this that made him an absorbing subject for Maguire, whose prints exploring colonial history challenge simplistic readings of the past.

In the prints, Maguire continues to develop her distinctive imagery drawn from ancient and colonial sources. The bold silhouettes of Greek vase paintings are particularly evident in her black-and-white etchings, such as those depicting amorous adventures involving Greek gods, Maori maidens, satyrs and settlers, in a series entitled Colonial Encounters. In the large colour lithographs of Titokowaru’s Dilemma, figures of similar style and clarity are set into New Zealand landscapes based on colonial paintings and photographs.

Presenting Titokowaru more as a thinking man than a fighter, Maguire frames his story in terms of the kind of questions that Socrates asked – we discover him debating ‘what is virtue?’ with Socrates, or discussing ‘what is peace?’ with his compatriot Te Whiti. In A Taranaki Dialogue, the enquiry continues in a series of small etchings of the Taranaki landscape, finally focussing on two questions that seem to underpin Maguire’s project as a whole:& it is she, as much as Socrates or Titokowaru, who asks us, ‘what is myth?’ and ‘what is history?’.