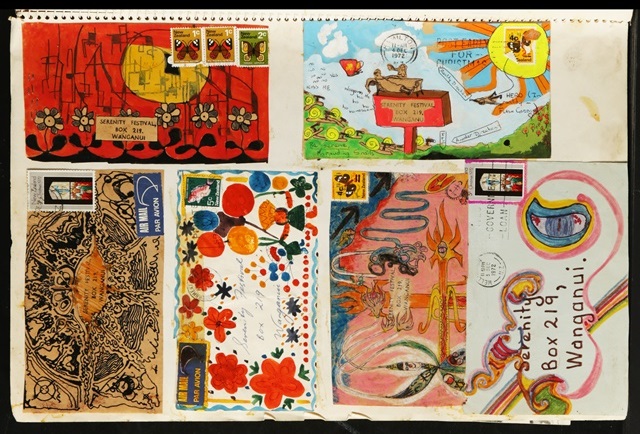 An array of colourful envelopes from letters sent to festival organisers

Flower power blossomed and boogied in a Putiki paddock and beyond at the beginning of summer, 1973 when the Serenity festival immersed Whanganui in four unforgettable days of music, theatre, art, yoga, and peace-loving celebration.

Two pages in a scrapbook of photographs taken at the festival are on show at the Sarjeant Gallery Te Whare O Rehua in the exhibition Revealed: collection discoveries from our recent move. One of the organizers of the festival was Whanganui local and international sculptor Hamish Horsley, who, at the time, was a bead wearing 22 year-old, with an Afro frizz of blonde curls, full of energy and ideas, and the capability and connections to make the festival happen. He took many of the photographs and compiled the scrapbook. 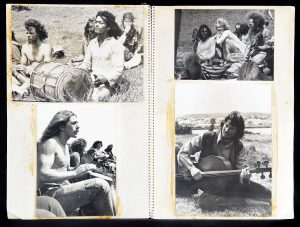 Photographs taken at the festival including one of south African drummer, Bauxhau, (top left)

While Serenity may have seemed like “a pretty off-beat, crazy little festival,” to the uninitiated it involved high quality performers and a significant number of people from both the Putiki and wider Whanganui communities Mr Horsley said. 2,000 – 3,000 people registered and probably more attended. “It was classic “hippy-dom” and you can see that when you go through the scrapbook photos. We were all dressed in beads and so on, so for Whanganui it was quite surprising. I still meet people who say – “Oh goodness Serenity!” and they remember. It was a one off – there’s been nothing quite like it before or since.”

The music was avant-garde, headed by top band Blerta.  The “strange combination of people” included an indigenous Australian didgeridoo player and a South African drummer he had met in Adelaide, composer Jack Body, poets Sam Hunt and Hone Tuwhare, director George Webby and Downstage Theatre, several contemporary sculptors and, unusual in the 1970s, a yoga teacher and his devotees.

Serenity began as an idea for an exhibition proposed by Sarjeant Gallery staffer, Jim Alp and grew into an event through a series of ideas generated by a small group. David Smiles, founder and director of Whanganui’s Four Seasons Theatre made the theatre available and Hoani Hipango allowed them to use land in Putiki. Mrs Ani Waitai-Haapu lent the organizing group her house for their HQ six months before the festival. “The local (Putiki) iwi embraced it and were integral to the whole event. They made a big area available for a camping ground and a café was set up on the marae.” 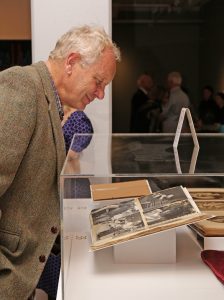 One of the festival organisers Hamish Horsley admiring the scrapbook

Mr Horsley was living with his parents, Alan and Enid on the hill above Putiki and they and their friends pitched in, working on the periphery to sell tickets then setting up a crèche and a Red Cross station. One local in the midst of it all was Sarjeant Gallery Trustee, Keria Ponga, then 13, a Santana fan, and the daughter of Mrs Waitai-Haapu. “I can picture it like it was yesterday. The whole community was abuzz. Something was happening everywhere. They had a black box room and there were all these artistic psychedelic things going on. Serenity was probably a pivotal point in my life and a precursor to why I follow concerts wherever I go.” Mrs Ponga said it was natural that her music-loving family and the people of Putiki would want to support the festival. “We had an uncle (Kawana Pohe) who travelled the world playing music so at a very young age my memories are of being surrounded by really good music. My cousin’s four- year-old daughter Te Ara Allen wore a kaftan – we were all into that kind of thing. I remember sitting on the top of the hill waiting for the next act and a child appears from nowhere on the stage singing American Pie. And she was absolutely gorgeous. The whole community was pretty open and accepting.”

The exhibition Revealed: collection discoveries from our recent move is on at Sarjeant on the Quay until 18th September 2016.