SCOTT EADY – Lost at the Bottom of the World
15798
portfolio_page-template-default,single,single-portfolio_page,postid-15798,bridge-core-3.0.2,qodef-qi--no-touch,qi-addons-for-elementor-1.5.4,qode-page-transition-enabled,ajax_fade,page_not_loaded,,vertical_menu_enabled,side_area_uncovered_from_content,qode-child-theme-ver-1.0.0,qode-theme-ver-28.8,qode-theme-bridge,disabled_footer_top,qode_header_in_grid,wpb-js-composer js-comp-ver-6.9.0,vc_responsive,elementor-default,elementor-kit-27794

SCOTT EADY – Lost at the Bottom of the World 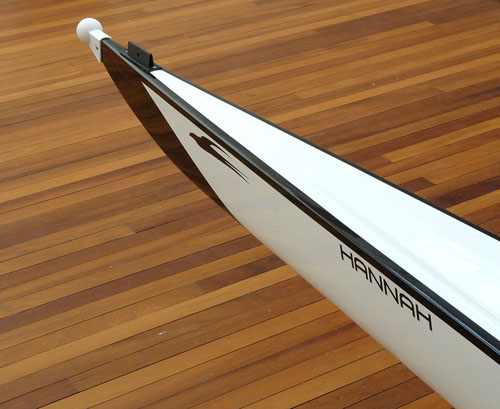 SCOTT EADY – Lost at the Bottom of the World

Scott Eady has, for the last decade, been making large-scale sculptural works with sardonic wit. These have included a room-sized wooden chainsaw, a lacquered pink pick-up truck and a life-sized ‘My Little Pony’ called Dahlia.  A boat called Hannah is the first object to be encountered on entering this exhibition. At first glance, it looks just like any ordinary, yet elegant, double-scull rowing boat (for those who know their boats), but closer inspection reveals something not quite right with its form. It is not a functional boat – at least, not suitable for competitive rowing. The boat has two bows. The rigging is set up so that the rowers are in opposition to one another, face to face. To stroke in unison would rock the boat back and forward like the pendulum of a metronome or an amphisbaena (serpent with two heads), resulting, also, in going nowhere.  The boat was fabricated in China to Eady’s specifications and shipped to New Zealand. Having never touched the water, the boat is displayed in the gallery, like a disabled arachnid, supported by stands and slings. What is normally a functional machine for transportation becomes useless and is transformed into an elegant sculptural object.  Similarly, the work Money Train is another work that goes nowhere: a small N Scale train set cast from now-obsolete 5c, 10c, 20c and 50c nickel coins. Two engines sit back to back and are linked to carriages that form a full circle.

Ideas of symmetry, opposition and place in the world are key in this body of work. The title of the exhibition can be seen as a musing on Eady’s current place of residence, Dunedin. At the other end of the country from where Eady was born – Auckland – Dunedin certainly does feel like the bottom of the world to North Island dwellers. Eady comments: “This exhibition is an investigation of the push and pull between home and elsewhere, between right and wrong places, of rural nostalgia and the realities of urban living.”  The idea of north and south is also reflected in the two photographs, God’s Green Hair and God’s Greener Hair, depicting ready-lawn grass, grown commercially at two sites at opposite ends of the country. The imported seed is green from excessive irrigation while awaiting harvest time, when it will be uplifted and transplanted to a new, probably urban, residential or commercial development. In a wider sense, Eady is also alluding to the phrase “the grass is always greener on the other side”, but what’s on the other side and will it be any better, or just a variation on a theme?

As with many of Eady’s works, the inflatable cloud work, Trade Wind, has a multiplicity of readings. Its title refers to the trade winds that guided pre-European and European settlers to New Zealand – the land of the long white cloud. The forms of the clouds are like the classic cumulus clouds floating in the background of children’s drawings. The “clouds” were also made in China, and when Eady initially started work on them, in 2008, the Chinese were busy shooting missiles into clouds to try and improve weather prospects for the Beijing Olympics.