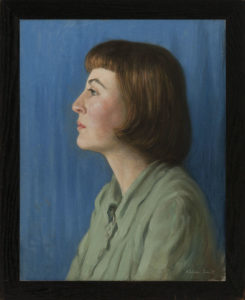 Vivian Smith’s Portrait of the Artist’s Daughter is part of the 125: Celebrating Women from the Collection exhibition.

Women are the subject of the Sarjeant Gallery’s most recent exhibition 125: Celebrating Women from the Collection – it is a richly diverse show that marks 125 years of women’s suffrage in New Zealand. The show aims to recognise the significant roles women play in society, and their contribution to the development of New Zealand art history, both as artists and subjects.

Works by male artists predominate most historical art collections and the Sarjeant is no exception, says Curator of Collections Jennifer Taylor-Moore, who co-curated the exhibition alongside Assistant Curator Jessica Kidd and Public Programs Manager and Curator Greg Donson. 125 aims to address that gender imbalance showcasing 34 works by women and 24 by men.

Taylor-Moore worked with the theme of women as nurturers, both as mothers and in their community. She says it was an opportunity to show works that are not often seen such as Karamajong Mother painted by Whanganui artist Joan Grehan from her time in Uganda and Robert Hutchison’s touching Bairnees Cuddle Doon. Robyn Kahukiwa’s He Toa Takitahi asserts the strength and identity of women as a collective, and Anne Noble’s photographs of nuns show women working to support a community.

“It’s been fun to think about how women are portrayed in art and to try and get a balance and variety within that; but also identifying with the subject. Such as this woman on the street with the toddler in his bare feet and nappy burying his head in her knees [by Peter Black]. They can’t go anywhere because he’s leaning on her and she’s probably trying to talk to him and get him walking again. It’s quite universal, and I remember those moments with my own children.”

A wall of portraits curated by Jessica Kidd presents a varied “family of women”.

“We wanted the whole exhibition to look very bold and to give the impression of being surrounded by women. We have a lot of women images in the collection so I chose a diverse group of ages and cultures.”

Kidd’s selected the portrait of Lilian Ida Smith painted by her father Vivienne in the late 30’s or early 40’s. Lilian ultimately donated a lot of the Smith’s collection to the Sarjeant and also created a trust from which the Lilian Ida Smith Award is now drawn. Julia Holden the current Tylee Cottage resident artist is the most recent recipient of that award.

Greg Donson’s curation explores different male and female representations of women particularly where there is an element of role-playing or masquerade.

“I have the extra awareness of the male gaze as well. So I think I did hone in on images where women were holding their own, on their own ground and looked assertive and strong.”
“Photographer Christine Webster’s work Provider is an ambiguous, curious work – an older woman presents us with this white, empty platter, so she’s not providing us with anything. It’s a conundrum. Christine was one of the first photographers to make works on this scale in this country.”

This story was first published in the Wanganui Chronicle on 25 September, 2018