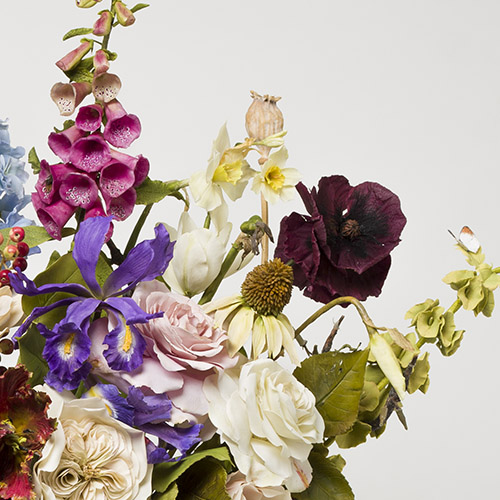 The second annual Pattillo Project, Tracy Byatt’s An Impossible Bouquet, is an installation which defies categorisation. At first glance, these works might appear to be artificial flowers, yet they are actually sculpted in an unlikely medium – sugar. Byatt’s work is at once familiar yet enigmatic; occupying a fascinating space between medieval sugar art and the rich tradition of historical still life painting. Her pieces are imbued with symbolic and personal meaning, while referencing artists who have influenced her artistic journey to this point. An Impossible Bouquet is a year-long project that is the culmination of a lifelong fascination with the natural world and is the artist’s most ambitious work to date.

Entering Europe around the 11th century AD, sugar quickly became a signifier of wealth and status. In medieval Europe it was a favoured material for opulent centrepieces at royal banquets, but today sugar is commonplace. In paste form it is soft and malleable, making it an ideal sculptural medium, but once set it becomes hard and fragile. Sugar is used to preserve, yet it can also cause decay. It is the push and pull of these contradictions that make Byatt’s work so arresting. Due to her chosen medium’s ephemeral nature, the finished pieces have a limited lifespan, eventually deteriorating much like the blooms she recreates.

Byatt draws inspiration from the extensive garden at her rural home near Turakina. What makes this remarkable work ‘impossible’ is that the specimens featured in the bouquet are from different seasons throughout the year. The varieties of flowers, plants, fruit and insects have been specifically nurtured to meticulously recreate in minute detail, blemishes and all. In a way, Byatt is dissecting, examining and replicating the plants in much the same way a botanist would – scientifically.

The artist’s process involves detailed preparatory sketches, some of which are included in this exhibition. Preferring to draw rather than photograph, Byatt absorbs every detail: from the veins in a leaf or petal, to tiny imperfections and insect damage, which tell the story of the plant’s lifecycle. Also on display are a selection of past works, including her Open Award winning piece from the Pattillo Whanganui Arts Review 2020, Parrot Tulips. Alongside her work are paintings from the Sarjeant Gallery’s collection that have inspired the artist, including a meticulous 17th century Dutch still life by Jan Baptiste (active 1629-1640).

Sugar’s popularity as a sculptural medium has waned in modern times, making Byatt’s work unique not only in a New Zealand art context, but also worldwide. Her fascination with the botanical world and ongoing quest for sweet perfection invites the viewer to take a disbelieving closer look, and a moment to study alongside her. Her masterful skill in the crafting of this mercurial material is a worthy centrepiece for display and celebration, banquet or otherwise.

The Pattillo Project was established in 2019 and offers the Open Award winner of the Sarjeant Gallery’s annual Arts Review the opportunity to develop a solo exhibition the following year. The winner of the award receives a $6500 cash prize and the chance to develop a new body of work with the curatorial, promotional and marketing support of the Gallery. It is envisaged that the Pattillo Project will support and uplift the huge talent pool in this region and give Whanganui artists a national profile. Our hope is that the project will ultimately become synonymous with the most exciting art – from New Zealand’s most exciting art region.