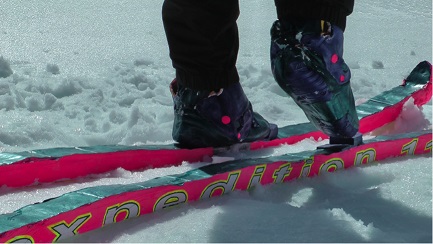 Over the last decade, Glenn Burrell has been pushing the boundaries of what a painting can or should be. His work has no support, no canvas, no board, no stretcher, it is pure paint and regular acrylic paint at that.  It was during his final six months of art school in Taranaki, while working on a house painting job, that Burrell first became interested in the three dimensional possibilities of paint. The owner of the property removed the interior skin of paint from a four litre tin and threw it to Burrell exclaiming “see how much of my paint you’ve wasted”. From there, Burrell experimented in covering objects with layers of paint and then removing the ‘skins’ from the host. His first object was a banana and over the last decade his ambition and confidence with this painting methodology has spanned the mini to the maxi; from gold ants and flies, to a candy pink trampoline complete with springs.

Burrells’ choice of objects is very considered and all of them have been drawn from the everyday. Often he has taken objects that have active qualities – a lawnmower, a bicycle, a wheelchair – all of which imply or require energy and movement. In creating paint skins from these objects, Burrell has de-activated, relaxed and disabled them. There was nothing abstract about these works, they were and are literally paintings of themselves.

The idea of pushing the boundaries of painting is not a new one; painters such as Jackson Pollock, Mark Rothko and Yves Klein all explored the physicality and spatial realms of paint in different ways. With an inventory of everyday objects under his paintskin belt and an interest in the kinetic and perfomative qualities of paint, Burrell has set about to fabricate a relationship where he could become an active agent in the secret life of paint and that is what is presented here in the Gallery.

The idea for Burrell’s ‘painting expedition’ originated from his time as artist-in-residence from May – July, 2011 at Tylee Cottage here in Wanganui. Over the last year Burrell has made a series of objects – skis, gumboots, a car tyre, bicycle and skateboard wheels, flippers and more recently and ambitiously a paint skin dreamboat. All of these objects have been tested by Burrell in the field at sites in the lower North Island and the results of this madcap relay have been captured in film and photography. What is displayed in the Gallery are the battered remains of these objects after the act, scuffed, broken and splintered to reveal the strata within. The final objects in their half alive half dead state capture the fizz of the events that took place. In his own words Burrell comments …

What has resulted is a vision of My Utopia. A soft metamorphic world of paint componentry set within fantastical landscapes. A fusion of painting, snow, sunshine, atmosphere, adrenaline, and fun. For me these works capture a dreamlike state, with make believe equipment that doesn’t seem right but comes together in its own haphazard way. With each new project I’m extracting a new bit of magic out of the material. Unorthodox, incongruous, but somehow strangely right. These works are a juxtaposition of cartoon plasticity and the real world around us.