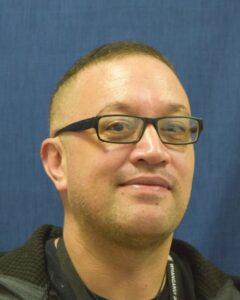 Each month a member of our community is invited to browse our online collection and select six of their favourite artworks. Each ‘My Choice’ selection, together with personal responses to the works, will be available to view on the Sarjeant Gallery website for one month at a time. The November 2020 My Choice has been selected by Whanganui District Council Customer Services Officer, Taane Tamati, and is available to view until 30 November 2020. Taane writes:

“Working in Customer Services and dealing with people, our culture now is a people first culture. I find this fits in perfectly with what my role is. As in essence, regardless of your role, we are all kaitiaki from the mountains to the sea.

Born and raised in the Rivercity, my ancestry of Ati hau nui aapaparangi and also Tuwharetoa links along with kahungunu and te whanau aapanui. I love Whanganui for the simple fact that I have a spiritual connection. “

Taane’s comments on Ans Westra’s photograph Wanganui Colour Work no. 2, 1990 are an excerpt from an article he wrote for the Whanganui Chronicle last year which can be viewed here: https://www.nzherald.co.nz/whanganui-chronicle/news/museum-notebook-mako-me-tuatara-old-stories-and-new-science-meet/JHKYS6SBLPZW7KZGH7SJUDEXQU/

Click on an image to see further details about the work and artist, and view a large version.

“I love this image. Way before Banksy, our own people were protesting against what they believed were the injustices that occurred in times past. I love the casual laidback style that the people in this image represent. I think this image rings true with injustices all over the world.”

“This excites me and takes me back to 1989, when I was all but 11 years old, at the A&P Show, where parents would dread sending their kids, knowing very well that it was a money trap… I remember seeing this lady there several times over the years, and still see her around Whanganui on occasions! The image reminds me of candyfloss, dodge ‘ems, the Ferris wheel and happy times! It was also the year my little brother was born, so even more of a special time to remember.”

“This image draws on my wairua, as I can see the strength in both these kuia’s eyes. The reason as to why I chose this particular imagine as that when you zoom in you can see the lines around the kuia’s face, which definitely tell a story of her life. I am also a descendant of this lady, her name being Maaki Taiaroa Haddon.”

“As a tamaiti (boy), driving from Whanganui to Pīpīriki seemed to take forever – this is the road we would travel.

As he drove my cousins and me up the awa (river), my dad would start telling us the story of a giant mako (shark) and a giant tuatara (reptile) that lived in the sea, in great harmony with each other.

They were the best of friends.

One day the other sea-dwelling creatures, roaring with anger, complained to Tangaroa, god of the sea, “Both Mako and Tuatara have eaten all the kai!” They demanded that Tangaroa sort this out, now.

Tangaroa called a hui and said to Mako and Tuatara, “One of you has to go live on the land.”

Without hesitation, Tuatara replied, “I will live on the land because I have legs.”

Tuatara and Mako said a sad farewell, knowing this would be the last time they would be together in the sea.

With a flick of his tail, Mako swam out into deep water. Tuatara swam towards the beach, and as he crawled out of the water, something magical happened. He began to shrink, to the size that he is now.

It is said that when the pūtātara (conch shell musical instrument) is played, Mako and Tuatara are talking to each another, reminiscing about their old lives together.”

“As a huge lover of our Whanganui Regional Museum, from the priceless Lindauers to our extensive collection of Moa bones, the thing I love about our Museum is that it never changes. Anything that has been photographed 80 years ago is still there and in our basement. Overall, the Museum is a special place to learn, for all ages with our extensive collection of Taonga Māori.”

“This photo was taken in 1978. I was only a few months old when Mum and Dad travelled from Whanganui up to Pīpīriki. I love this image as it truly captures the essence of my Father – by his people, with his son at his side (the girl to the right of Dad is one of his Cousins, Ainsley)”

This image is in the personal collection of Taane Tamati.