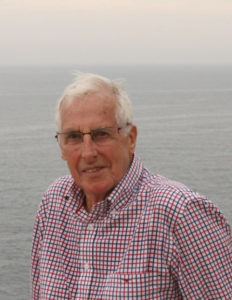 Each month a member of our community is invited to browse our online collection and select six of their favourite artworks. Each ‘My Choice’ selection, together with personal responses to the works, will be available to view on the Sarjeant Gallery website for one month at a time. The March 2020 My Choice has been selected by Jim Norris, a retired farmer and manager, and is available to view until 31st March 2020.

Jim was brought up in Bulls and farmed at Mangamahu during which time he encountered the artists Nigel Brown and Philip Clairmont, who both painted in the Mangamahu area. Clairmont in particular is a favourite NZ artist of Jim’s. In 1990, after 23 years at Mangamahu, Jim moved to Whanganui to manage a Kiwifruit packhouse and coolstorage company, retiring in 2016. One of Jim’s recent passions has been the Whanganui ex-patriot artist Herbert Ivan Babbage and, after viewing an exhibition at the Sarjeant, Jim researched and published an illustrated booklet about the artist in 2017. Jim states “It would have been easy to select some outstanding well known works, such as The Wrestlers and Flight into Egypt, however I have chosen some of the lesser known ones among the 8,000+ in the collection. My selection was made on a personal basis because they either impress, intrigue, trigger memories or, in the case of the Grehan work, simply amuse. I trust they will encourage visitors to realize that hidden away on the storage racks are treasures of every description, just waiting to be encountered by new viewers.”

Click on an image to see further details about the work and artist, and view a large version.

“I saw an exhibition of Herbert Babbage’s work at The Sarjeant Gallery in 1999. I have been an enthusiastic admirer of his work ever since. ‘Waiting for the Tide’ is an example of Babbage at his impressionistic best when describing light, reflected where it falls on water. It is typical of the work being produced in St Ives during the time Babbage had a studio there in Porthminster Square. He brought this painting with him when he came back to New Zealand for two years in 1909 and it was shown (Lot 214) at the 21st annual exhibition at the New Zealand Academy of Arts. I have chosen this painting because it displays the qualities of marine painting that both Herbert Babbage, and many other St Ives School artists, who were his contemporaries, accomplished so convincingly.”

“This selection is one of my personal indulgences. I bought ‘Rosedale’, a hill country farm across the Whangaehu River from the Mangamahu village, in 1967. The green hills in the background of this painting are part of ‘Rosedale’ and the yellow hill is ‘Kohanga’, a small hill with a trig point, in the middle of some river flats. It is a remnant of the changing course of the Whangaehu River over thousands of years. Nigel Brown visited Mangamahu several times and painted this view at least twice. I have included this painting because of the memories it triggers for me personally. ‘Rosedale’ was my home for 23 years, from 1967 – 1990, and it is on these hills that I spent a large part of most summers spraying gorse and cutting scrub.   It is also here that Linda and I brought up our two children.”

“I have long been an admirer of Michael Smither’s paintings and of his ‘Family Series’ in particular. This series, from which ‘Thomas and Joseph with Red Chair and Piano’ comes, is a collection of paintings showing Smither’s young children in the early 1970s. The faces of the children often border on looking grotesque, but are always full of the character present when young children are teasing their father, playing games or fighting with each other for a favourite toy. Smither’s choice of colours is always inspiring and the red floral chair, yellow jersey, blue shirt and black piano are a combination that I enjoy. This ‘Family Series’ was about people and, in particular, about a young family growing up. I chose this painting because it is a grand example of Michael Smither at his emotive best.”

“This unfinished painting by Edith Collier appeals because of its bright refreshing colours. I first saw it when it was displayed in the Sarjeant Gallery at Pukenamu Queen’s Park. For me, the unfinished state adds to its intrigue and I find it an appealing and evocative work. I made a drawing of this work that resulted in an etching I was pleased with, and Edith Collier’s painting of the girl in a hammock remains one of her works that I always remember fondly. This painting has been included because its bright colours and intriguing composition appeal to me, as do Collier’s stronger Kawhia paintings.”

“Richard Wotton is my neighbor and I was aware of his extensive photographic cataloguing of art deco houses, not only in Wanganui but also throughout New Zealand. Intending to be helpful, but also to have fun with Richard, I would photograph these houses if I found one that was quirky. On my way to Hawkes Bay and poking round back streets I found one in Woodville that I was sure he would not have encountered. When I told him I had found one in Woodville, he said “Is it in Ormond Street?” I didn’t have the answer to the street name, so he asked “Does it have a verandah that looks like it is frowning over the front doors?” Then he went to his studio and brought out a copy of the image ‘Art Deco House #3’. I have included this photograph in my choices because it reminds me of my failure trying to find a house that Richard was not already familiar with.”

“As well as evoking emotions, triggering memories, and providing aesthetic pleasure, art can at times amuse. I have chosen this painting from Joan Grehan’s work because it is both delightful and amusing. It is from her children’s book, ‘Dibble, Dabble and some Doubles’, published around 1951, and is the illustration that appears on page seven. The Sarjeant Gallery has reprinted this charming Joan Grehan book and it is now available for purchase at the Gallery shop. The painting is a charming depiction of one of the troubles during the adventures of a little yellow duckling who, in this painting, has fallen down an empty post hole. It also reminds me of my then two year old son who fell, head first down a hole I was digging for a strainer post at Mangamahu, and had to be dragged out upside down, by his feet.”