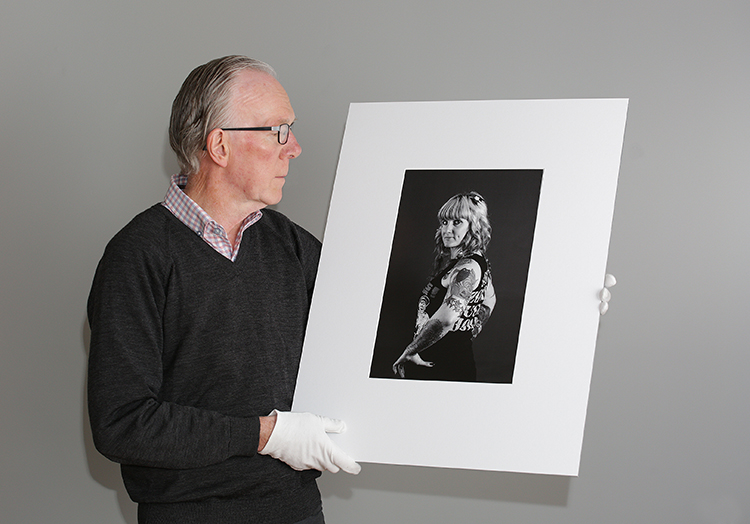 Richard Wotton with his photograph of Trace

“Excuse me, my name’s Richard Wotton. I’m a Whanganui photographer doing a project shooting portraits of tattooed people and I wonder if you’d be interested in taking part?”

Richard Wotton approached upwards of 150 people with this request over a two-year period in the streets of Whanganui, Auckland and Wellington. The result is an exhibition entitled Marking Time: Portraits of the Inked, opening at the Sarjeant Gallery, 5 November 2016.

These portraits are part of his personal creative work. But why did this seemingly mild-mannered, self-effacing man choose to photograph tattooed people, and why black and white photographs, given the colourful, extroverted style of tattoos and the individuals inside them?

He prefers black and white because the removal of colour gives the photographs a semi-abstract quality. “I think it gives a more sculptural look to an image – the effects of the light, shades of grey, black and white – and that cuts away a lot of distraction, especially in a portrait. But that’s my personal preference, as many people do colour portraits.”

His first, and still favourite, subject, was Trace, a Whanganui tattooist who strikes a confident pose, eye-balling the camera, hand on hip. And it’s the detail of the crooked, curving hand he particularly likes – “the best hand I’ve ever photographed!”

The show presents 45 portraits of people who he says look as though they face life head on – but then, who knows? Mr Wotton says the camera can and does camouflage, sometimes misrepresent. The viewer also brings their perception and reading of the image. The individuals’ faces, their expressions and body language are striking. The tattoos are somewhat secondary because it’s the people who hold the most interest for the photographer.

One could be an actor out of a Biblical epic movie, Mr Wotton suggests, and another, Julie from Whanganui, who does roller derby, sports an arm tattoo revealed, astonishingly, by a rock-a-billy style sundress. A young man from the streets of Wellington displays a shark swimming out of his armpit and down his chest.

“I said, ‘Is that a thresher shark you’ve got tattooed there?’ and he replied, ‘Yeah, I’ll show you how long its tail is,’ and he lifted his arm. I said, ‘Hold it right there.’  It’s a great shot, and I would probably never have thought of asking someone to pose like that.”

A woman on K Road in Auckland caught his attention with her stylish clothes, white blond hair and shoulder tattoo. But there was more. “When we’d done a number of shots in the studio, she said, ‘I’ve got a really big tattoo’ and undressed to her underwear.” That tattoo is a peacock down one side of her body, from shoulder to thigh.

Mr Wotton doesn’t have a tattoo, and says the only thing he might consider is “Do not resuscitate” across his chest. And that request, tattooists tell him, is quite common among older people.

To complement the exhibition, local tattooist Nick Fletcher from Flaming Art Tattoos will do a live demonstration of portrait tattooing at the Sarjeant Gallery on Saturday, 12 November, from 10.30am to 4.30pm.

This story was first published in the Wanganui Chronicle on 26 October, 2016.