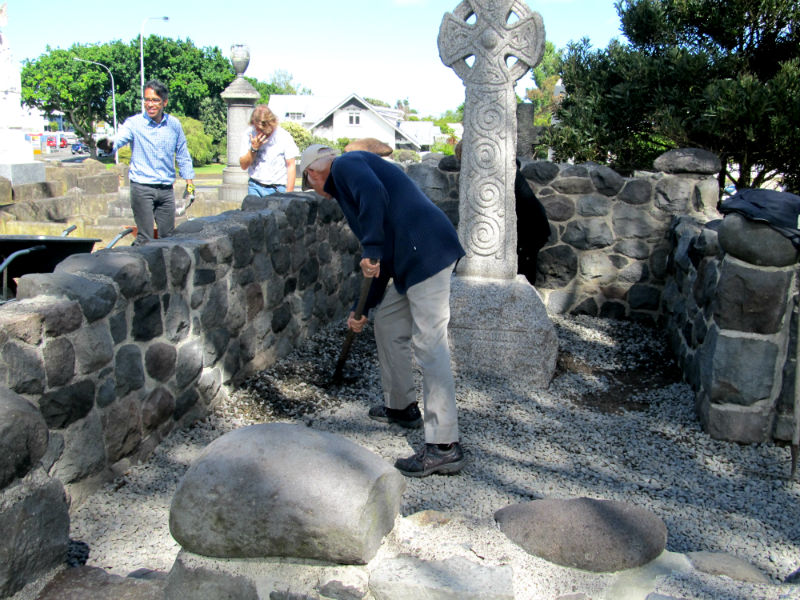 Working Bee: From left – Andres Salinas, Tom Turner and Ian McGowan from the Sarjeant Gallery Members’ Executive tidying up Henry Sarjeant’s grave in preparation for the re-dedication on 20 November.

On a hill in the Old Whanganui Cemetery, corner of Guyton Street and Heads Road, stands the grave of one of the city’s most generous benefactors – Henry Sarjeant born 20 November 1829 in Gloucestershire, England.

Mr Sarjeant immigrated to New Zealand in the late 1850s and when he died, 12 February 1912, aged 82 he left property valued at £30,000 in trust to the Wanganui Borough Council for the purpose of building and maintaining an art gallery and its collection. The building, perhaps the finest provincial gallery in New Zealand, is a testament to Mr. Sarjeant’s generosity, but his gravesite had been largely overlooked, until sculptor Hamish Horsley made a happenstance discovery.

While looking for the graves of his great-grandparents earlier this year he was drawn to a finely carved cross, conspicuous among the other monuments. “I walked up to see it because it looked like an interesting Celtic cross made of granite – and there underneath it was Henry Sarjeant. It’s a huge, L-shaped enclosure, very neglected, and only he was in it. I was surprised so few people knew about it.” The Celtic cross is like a traditional cross but with a ring around the intersection of the stem and arms and is frequently decorated with ornate Gaelic patterns.

Mr Horsley began talking to people such as Bill Milbank, stone conservator Marco Buerger and Sarjeant Gallery Trustee, Hari Benevides. It was decided to clean up the gravesite and rededicate it on 20 November 2016 to mark the anniversary of Mr Sarjeant’s birth. Historian Jock Philips will give a public lecture to commemorate Mr Sarjeant’s life, his gift to the city and his place among benefactors and philanthropy in New Zealand cultural life. “I think what he gave is hugely important to the gallery and to the town at large,” Mr Horsley said. “New Zealand does not have the substantial collections that are enjoyed by older institutions around the globe, therefore what we do have we must treasure.”

Mr Buerger, who studied at the Cologne University of Applied Sciences and who rebuilt the war memorial in Pakaitore Moutoa Gardens, was engaged to restore the gravesite. “There was a lot of bio growth on the stone–algae, moss, lichen. It’s always good to keep them off because they leach out the stone and release acids that can eat into it.”  While granite is naturally acidic and less susceptible to leaching than limestone, it will require cleaning every five years. To do this Mr Buerger used a water blaster, no chemicals.  He also repaired cracks caused by the constant vibration of traffic movement and earthquakes over the years. The repointing required careful matching. “It is desirable to keep within the same tradition of workmanship and to design the mortar so it is a visual match and isn’t harder than the surrounding stone.”

Sarjeant gallery events/communication officer, Raewyne Johnson is thrilled with the restoration work. “You can see the new pointing quite clearly now but within about a year the surface will have weathered enough for it to match or blend in with the old pointing.” A rustic boulder wall with a small entrance surrounds the grave-site. Sarjeant Gallery executive members lent their muscle to barrow fresh gravel up the hill and onto the site. The members’ executive is also assisting towards the cost of the conservation work.

The public is warmly invited to attend the rededication conducted by Kaumatua Uncle John Maihi and Archdeacon Stuart Goodin.

9.30am: Rededication of Henry Sarjeant’s grave-site. Whanganui Heads Road Cemetery, corner Guyton Street & Heads Road. This will be followed by morning tea at Sarjeant on the Quay.

This story was first published in the Wanganui Chronicle on 15 November, 2016.