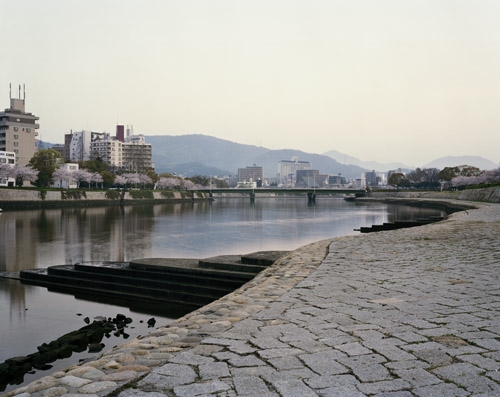 The First City in History is the most recent body of work from Auckland-based artist Fiona Amundsen. With a background in social anthropology, Amundsen’s practice investigates how photography operates on social and cultural levels. This suite of seven photographs features the Japanese city of Hiroshima, the first city in history subjected to nuclear warfare when it was bombed by the United States of America on 6 August, 1945, during World War II. Amundsen comments: “The First City in History is a sustained photographic investigation into the Hiroshima Peace Memorial Park, the Genbaku Dome, the Aioi Bridge and the surrounding walkways. This project seeks to explore the disparity between the uniquely subjective experiences of being in such historically loaded sites and their representation through photography. This project also plays on the socio-cultural understanding of both site and photography, the former linked to how photographs actually do reveal something about what they depict, while the latter is grounded in the notion that space itself is always ‘cultural’. Subsequently, what these photographs disclose has more to do with the invisible structures that make up a city but can’t necessarily be seen in a photograph – things like politics, economics, the social and cultural profiles of a city, its history, all of which influence how a city ends up looking. Ultimately, the core ideas of this project involve an investigation into how socio-cultural historical narratives are preserved and then re-enacted through this city’s public spaces.”

The opening of the exhibition coincided with the 65th anniversary of the bombing. The exhibition has been made possible with the generous support of the Asia NZ Foundation, AUT Auckland University of Technology and NZJEP (New Zealand-Japan Exchange Programme).