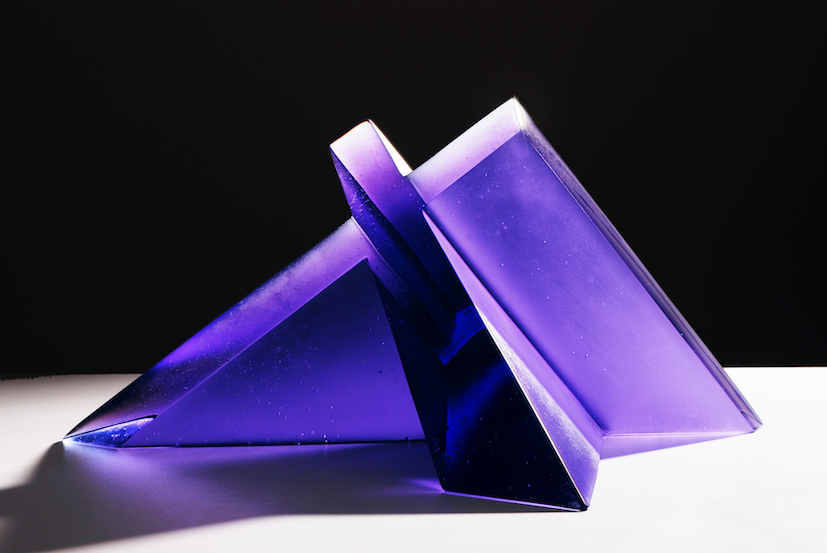 As a child Emma Camden remembers going to visit the studio of the artist Frank Martin on Hayling Island off the South Coast of England near Portsmouth where she grew up. She recalls holding her father’s hand and has a vivid memory of thinking that the studio, filled with half-finished busts was a wondrous place and that it felt like the kind of life she would like to live. Over forty years later on the other side of the globe Camden has made that life for herself in Whanganui. Her training – much of which has been self-taught over the last twenty years – has led her to be known as one of New Zealand’s most accomplished cast glass artists. Camden’s studio that she shares with partner and fellow caster David Murray is more akin to a mini factory rather than the romantic view of a traditional artist’s studio. Cast glass is a labour-intensive and physically demanding material and for all its jewel-like qualities in its finished state, this is a medium that requires patience, skill and vision to transform raw material into form.

After graduating from the University of Sunderland in the UK with a BA (Hons), Camden came to New Zealand in 1992 and secured a position at Unitec in Auckland as the tutor for a foundation course in glass. An opportunity to participate in a Masterclass in Canberra with renowned British cast glass artist David Reekie, gave her the chance to learn more about the lost wax casting method and it was from this point that she was hooked on the casting process. With the development of Gaffer Glass, established in Auckland by John Croucher and John Leggott, casting became all the more achievable with ‘locally sourced’ material rather than imported German glass. It is from that time that casting in New Zealand really became established. Camden was there from the outset and it is no wonder that two decades later she now has an impressive and weighty body of work behind and ahead of her – physically and conceptually. This exhibition brings together a selection of works that represent Camden at her best. There are other more intimately scaled works that are not included in this exhibition that have made their way into people’s homes, but it is her architectural forms that have a continuing monumental presence in the world.

Viewing Camden’s work en masse it is clear to see that there has been a consistent architectural focus in her practice – stairs, towers, viaducts, pyramids, passages and chambers. These forms have explored themes that are by turns autobiographical and universal. Pyramids feature passages drawing on the Egyptian belief that these shafts allowed the soul to escape after death; a viaduct is improbably stretched and leaning; and a rhubarb-coloured flyer is a curious blend of origami meets stealth bomber.    NOW is an entirely appropriate title for this exhibition. Featured are six ambitious new works that have been made specifically for this exhibition with the generous support of Creative NZ. Having this financial assistance has allowed Camden to move away from her usual approach for working in a serial manner and she has created six stunning new works that are commanding and complex in their technical skill and physical form.