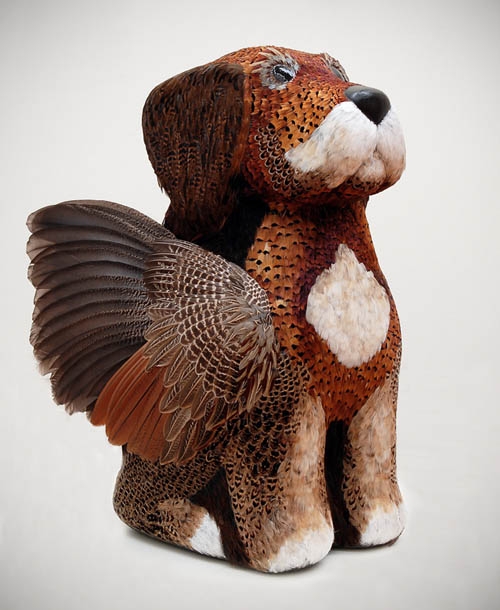 Feather Fancy brings together a new body of work made whilst Emily Valentine was artist-in-residence at Tylee Cottage, from March to May of this year. Sydney-based Valentine is the first jeweller to undertake the residency, but the title ‘jeweller’ doesn’t sit comfortably with these works as she occupies a strange hinterland: a jeweller turned object maker and sculptor. Valentine trained as a jeweller at the Sydney College of Arts and worked as a costume maker, but for the last twelve years ‘feathers have been her paint’ and she has developed her own techniques and styles using them.

In 2005, Valentine made her first hybrid birdoggie, and since that time she has continued with this cross-pollination of man’s best friend and man’s best envy – an ability to fly. An extremely important aspect of Valentine’s work is that of salvage; although these creatures may seem exotic, their origins are humble. Purchased from second-hand stores as kitsch ornaments, more often than not it is the feathers of common or pest species, such as the mynah bird, that adorn the surfaces. Specimens are often sourced from road or cat kill as well as commercially purchased feathers. For the residency at Tylee Cottage, Valentine made contact with the local branch of Bird Rescue, which kindly offered her some frozen specimens they no longer had room to store.Australian curator Yolande Norris commented earlier this year: “Central to Valentine’s practice is an awareness of humankind’s double standards when it comes to the forms of life with which we share the world. The subject of animals as ‘pests’ is particularly complex. Valentine is intrigued by the notion of that which does and doesn’t belong: one considered good and the other to be eradicated.” Pheasbin is Valentine’s largest work to date. This beautiful mongrel came about after Valentine spied the receptacles for collecting ‘doggie waste’ dotted around the city. After contacting the Wanganui District Council to see if they had any they no longer required, she returned to the cottage one day to find a shiny black plastic dog in the back garden, and this was cooked up in Valentine’s studio as the genetically modified Pheasbin. The birdplane works featuring in the exhibition are a departure from the canine world. With a militant edge, these works hint at a weird world where genetic modification has gone horribly wrong.These works raise a series of very topical questions, but the delight of Valentine’s work is that the pieces can be taken at face value: they are weird and curious creatures, beautifully crafted and engaging, and in Feather Fancy they all amount to an old-style museum diorama gone disco.