Julie Collis, 'The Milk of Human Kindness' from the 'Precious' Series, 2019, porcelain and gold lustre. Courtesy of the Artist. 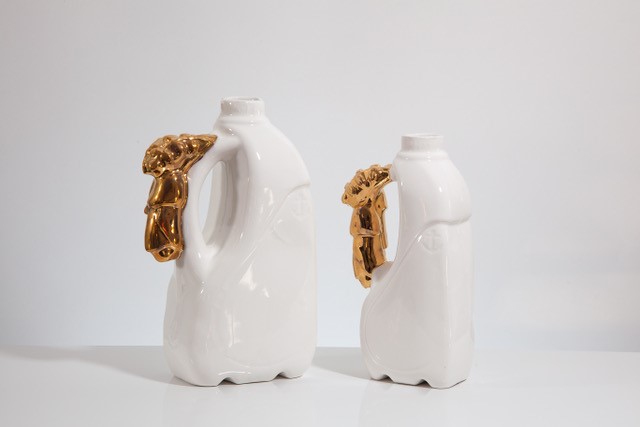 A nucleus of Kiwiana, the proliferation of the New Zealand dairy developed out of necessity – during the depression of the 1930s, front rooms of houses were either built or converted to accommodate a small shop selling grocery items and confectionary. However, dairies sit in the unenviable position of both precariousness and necessity; they operate on very slim margins and their future may be uncertain. This exhibition utilises the New Zealand dairy as a cultural point of contact that represents ingenuity, economy of means, nostalgia and a sense of fun. It brings together works that depict everyday items, for example confectionary, fruit and Kiwiana – the kinds of things found at the dairy, or reference the dairy itself. It could be a paean or lament to the shifting status of the dairy in New Zealand culture. Includes works by Jeff Thomson, Erica van Zon, Wayne Youle, Ann Verdcourt, Scott Eady, Julie Collis, Joe Sheehan, Madeleine Child, Paul Maseyk, Rob Brandt, Oliver Cain, Simon Lewis Wards, Glen Hayward, Elisa Barczak, Ada Leung, Jay Hutchinson, Gina Matchitt and Lauren Lysaght.