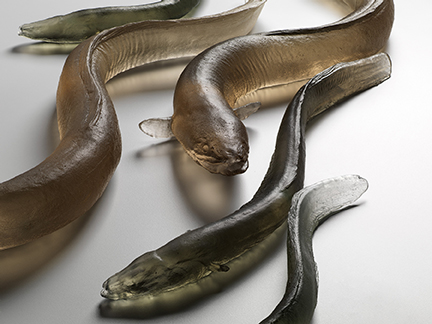 Cast glass eels seem to swim, glowing out of the dark; kumara and Maori potatoes spill from bronze kete alongside a harvest of European fruit and vegetables. The three installations entitled respectively Rain at night…, With my food basket… and Yield are part of an exhibition by Wendy Fairclough on view from 25 November to 11 February at Sarjeant on the Quay.

The show entitled Common Ground features work produced during and after her residency alongside selected works from 2003 – 2014. It is based on the theme of indigenous and early settler food and, an abiding theme, the commonalities between different cultures.

“My concept was to reference early Maori and Pakeha natural food sources,” Ms Fairclough said. “Much of the first month of the residency was focused on research. I immersed myself in the Whanganui Regional Museum and the Alexander historical library, researching eel fishing techniques, early Maori and European cooking and food preparation, local history of the region and tools and techniques for food production.”

Her fascination with eels began several years ago when, “my brother pulled one out of the freezer, chucked this grey lump into the frypan, talking to me while it fried up. Then he wrapped it in greaseproof paper and took it off to work for lunch.” Later, seeing eels alive and feeding at Mt Bruce was a totally different, awe inspiring experience. 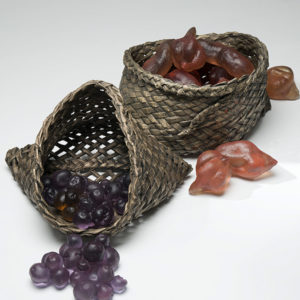 Ms Fairclough’s research found that John Tylee, the Cottages’ namesake, encouraged the cook of the 65th regiment stationed in York Hill stockade to grow vegetables for the regiment near the stockade, a discovery that made a fine starting point for the project.

During the residency she introduced new elements into her work, learning about bronze and aluminium casting, Maori traditions, protocols, harvesting, sizing, and weaving techniques. She worked closely with local artists and artisans, such as Trina Taurua, traditional weaving tutor at Te Wananga o Aotearoa and bronze caster, Ross Wilson.

The residency was an important homecoming for Ms Fairclough both emotionally and professionally. She spent time with her father and family, renewed and strengthened existing relationships, and made new connections within the local glass and art community.

She remembers her art teacher at Wanganui High School, Peter Donne, who was an important early influence. “He was an awesome teacher, a beautiful man, really supportive and empowering of students.”

Ms Fairclough had wanted to be an artist since she was 11 years old, and spent a lot of time at the Sarjeant Gallery.
“It feels incredibly special that I’m now going to show my work in the Sarjeant Gallery. When I was at High School I was there all the time. It was my resource, and really important in my growing up as a young person.”

Curator Greg Donson said the Gallery is thrilled to show the work of one of Australasia’s best glass artists, who is very firmly from Whanganui. The exhibition, which also features a retrospective selection of her works sourced from Australia and New Zealand, will give people an idea about the quality and length of Ms Fairclough’s practice.

“Wendy’s work is about the everyday and the things that link us all together as humans. She recreates everyday objects in completely unexpected ways in cast and blown glass, also using other components such as concrete and bronze,” Mr Donson said. Specialised lighting will make for a dramatic exhibition and “quite ordinary things will look extraordinary by the way they are lit” says Donson.

Wendy Fairclough’s Tylee Cottage Residency was made possible with the assistance of Arts SA and Creative NZ.