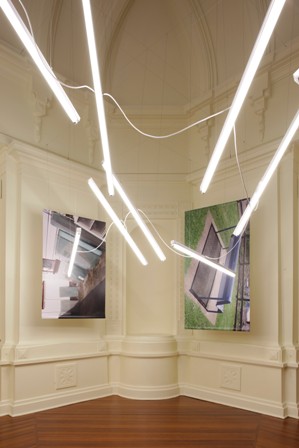 A dome installation by Bill Culbert featuring flurorescent tubes suspended in the dome and eight large scale photographs of local sites. Culbert is one of New Zealand’s most senior and respected artists who divides his time between London and France. This is the only work, for a museum, that Culbert will be completing while he is New Zealand for the launch of the monograph Bill Culbert: Making Light Work by Ian Wedde and published by Auckland University Press in August.

Entering the Sarjeant Gallery is a special occasion at all times. The gallery’s architecture, an uncommon mixture of Neo-Classicism and early Twentieth Century design, provides the visitor with an additional experience to that which one normally hopes for in an art gallery – the art. Culbert’s installation, within this space, is an exploration of place, spatial reference and harmonies of theory and concrete reality. It is a re-telling of his experience and understanding of Wanganui, firmly and critically placed within the Dome area, which acts as the work’s frame and context.

Culbert came to Wanganui in late 2008 in order to consider creating a work for the Sarjeant Gallery. While in town for on three days or so, he was struck by images of the commonplace which, when interpreted through his eyes, become extraordinary – vernacular architecture, tyre marks and architectural debris in salvage yards. Wanganui of course has much more to offer to an attuned observer. In tandem with the built environment lies the intangible and metaphysical experience of the town’s location, amplified by the Whanganui River. Culbert was immediately receptive to the potency of this natural feature in exactly the same manner as local Māori have always been. He was drawn to the immense force of the awa as it passed by the North Mole and entered the Tasman Sea connecting Wanganui with the world. One cannot help but be affected by the strength of this natural feature and indeed the numinous energy which emanates from it.

It is one of the characteristics of Culbert’s work that, as an artist, he seems to be ‘plugged in’ to the power and vigour of places and objects. This kind of understanding, of the nature of things, imbues his installations with a depth greater than their sole sculptural appeal. In truth, what Culbert achieves is a point of interaction between the viewer and his own curiosity about a given area or thing. Throughout 180o x 2 Whanganui Bill Culbert acts as a guide. In his pictures of Wanganui scenes, in his placement of fluorescent light tubing, he gives us prompts and asks us, in our mind’s eye, to take a journey to the places he’s found and to experience the emotions and sensations he discovered during his Wanganui expedition. These experiences can only be had here. This tour, these sights, can only begin within the Sarjeant Gallery’s elegantly proportioned central Dome.