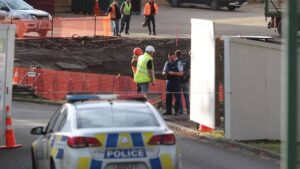 Police at the Sarjeant after cannonball found

An explosives expert has been called in after an “item from an unknown origin” was found this afternoon during the excavation for the Sarjeant Gallery extension at Pukenamu Queen’s Park.

All work on the extension has been called off to ensure the safety of workers and the people of Whanganui until an explosive ordnance disposal (EOD) operator has checked the item, Whanganui Police told the Chronicle.

Police arrived at the scene around 3.30pm. The nearby Davis and Alexander libraries continued to operate, as well as band practice at the Brass Whanganui rooms in Queen’s Park.

This article first appeared in the Whangnaui Chronicle and NZ Herald online on 1 July. See here