Posted at 16:50h in Media Releases by Officer
11 Likes
Share

By Joan and Mike Street. 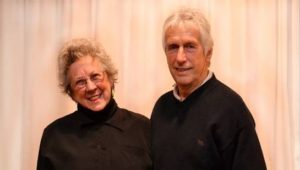 Last year’s Pattillo Award was won by Dr Kathryn Wightman, with a 3D image of her son Austin’s head. The inaugural pattillo project at the Sarjeant displays two more examples of her ground-breaking work in glass. On one wall is a constantly moving projection, resembling wallpapers of yesteryear, to which have been added videos from YouTube, only fragments of which can be deciphered. This was created by “screen printing layers of coloured powdered glass on to sheets of flat glass, then placing them in a kiln to set the layers”. Probably known best for her glass carpets, Kathryn is an innovative artist out of the top drawer. With Austin again as her subject, she used a scanner and a 3D printer to form his likeness on a tall, slender, multi-coloured “totem” pole, also fashioned from glass, his sculptured head on the top. His profile can also be distinguished on some of the lower segments.

At last Friday’s opening of Digital Parent, Austin himself proved quite an elusive little character, dodging round the legs of the assembled crowd. His heavily pregnant mother coped calmly with this bundle of energy, without any apparent stress. “Pragmatic Parent” struck me as an alternative title!

Anne Pattillo herself was unfortunately not present when the two brief speeches were delivered, having been caught in heavy traffic en route from Wellington. That probably caused Greg Anderson less discomfiture than the thought that his star performer might give birth then and there! She didn’t.

Amid the random thought patterns and free association of ideas in last week’s column, I mentioned the fact that I often had classical music playing in my Collegiate classroom, CD or Concert Programme. As the latter has been under threat of imminent dissolution in recent weeks, there have been countless articles and letters in the media protesting against this decision, which now, thankfully, seems to have been revoked. The bland, arbitrary comments by the iconoclasts in charge of programming, that Concert appealed merely to the elite and those of advancing years, was challenged by more than one contributor. My personal experience may be 20 years out of date, but is still relevant.

As I said last week, when students entered my room they would settle quietly, listening to the music, until the lesson began. On one occasion a group of Bursary Classical Studies pupils came in as I was listening to one of my favourite pieces, Elgar’s Cello Concerto. All in and settled, I made to switch it off as they were about to tackle a written test. However, Hadleigh Walker asked that it be left on as background. I asked if anyone objected to his request. Nobody did. For the first time music was played throughout one of my lessons.

Returning to that “free association”, why should I remember Hadleigh so clearly? Well, apart from being an intelligent and witty young lad, he was also keen on drama, and had appeared in a couple of WCS productions directed by Joan and myself. In that same class was Jane Hardey, another actor of talent and promise. A few months earlier, the Master in charge of Drama, Rikki Jackson, had suggested that the two of them should be given a real challenge, performing in a play which would both stretch them and enable them to display their acting ability. Would I be willing to direct them in Medea, a tragedy by the Greek author Euripides, written 2500 years previously.

It was a challenge for me too, as the only translation I had was stilted and outmoded, so I spent much of my summer holiday translating the words of Euripides into an intelligible, modern version. When the rehearsal period arrived, far more backstage work than normal was needed for such an ambitious undertaking, but I’ll put that to one side and stick to the most important aspect, the acting. Limiting the plot to its barest of bones, Medea has been tossed aside by Jason, who is ready to sacrifice his life with her and their two sons for the love of another woman, a story line still relevant today. Anger, revenge, hatred, bitterness, hysteria, pride — Medea runs through the whole gamut of emotions. She must make Jason feel pain and suffering as she is doing! How best to achieve this? By killing his — and her — two sons! How could it be possible to feel any sympathy for the perpetrator of such an irreligious, horrendous deed?

Both the leads had immersed themselves in their roles, learning lines thoroughly, delivering with feeling and proving well worthy of Rikki’s high opinion of them. But something was niggling at me. Although Jane’s portrayal of Medea — gloating, vindictive, spitting venom — was completely acceptable and understandable, it lacked a tiny element to develop her character that bit further. But what? Jane and I discussed it, devouring the text again. She then decided that she needed to fully inhabit Medea’s mind in her state of mixed, confused emotions, and actually become Medea. You may say that all actors do this. No way! Far too many simply deliver lines, without feeling, others cannot find the person they are searching for.

Jane? To say she gave an outstanding performance would be well short of the mark. Stunning, riveting, supreme would be more apt epithets. Jane actually made the audience feel sorry for Medea! How was that possible, when she had murdered her own two sons? Hard to explain, but she did. Her anguish and vulnerability made it seem almost inevitable that she was forced to perform this unspeakable act against her own sons, whom she clearly loved passionately. It was a magnificent piece of theatre.

In addition, this change in her character produced a marked difference in Hadleigh’s portrayal of Jason, responding instinctively to her new interpretation. The result was an incredibly powerful scene, dripping with pathos.

After university, Hadleigh spent some years in professional theatre with The Bacchanals, a Wellington-based group of actors. Whether Jane ever returned to the stage, I just don’t know. Certainly they both possessed talent in abundance.

Comments and suggestions to mjstreet@xtra.co.nz