Ease of removal of trees suprises

Posted at 14:42h in Media Releases by Officer
11 Likes
Share

By Laurel Stowell, Reporter for the Whanganui Chronicle 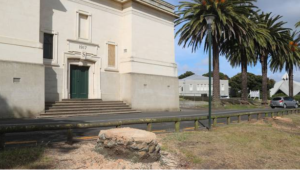 A Whanganui historian is surprised that trees once known as “the victory oaks” have been so easily removed from Pukenamu/Queen’s Park for the Sarjeant Gallery extension.

The five oaks are among nine trees removed on January 10 to make way for the estimated $42 million project.

All were once listed as protected in Appendix C of the District Plan – Protected Trees.

The five oak trees that formed an avenue behind the gallery were planted on July 19, 1919, during peace celebrations after the World War I Treaty of Versailles, historian Kyle Dalton said.

The two immediately behind the gallery’s back door were planted by the wives of then-Mayor Charles Mackay and then-MP Bill Veitch.

They were part of a landscape plan made earlier by designer David Tannock, and they became known as “the victory oaks”.

Their protected status was removed in 2013, Whanganui District Council said in a statement.

The oaks were assessed in that year, using the standard method for tree evaluation. They were found to be below the threshold for protection, and protection was removed.

The five Canary Island date palm trees (Phoenix canariensis) immediately behind the gallery were among 17 on Pukenamu that are protected.

The removal of four of those trees was approved as part of the resource consent for the gallery extension, issued in 2014.

The consent application was publicly notified, the subject of a hearing and determined by an independent commissioner. No one objected to the removal of the trees.

Although Dalton didn’t object, he would like to see timber from the oaks used to make a memorial to young architect Donald Hosie that will retain the trees’ link to WWI.

Hosie designed the gallery before becoming a soldier. He was killed in action at Passchendaele, aged just 22.

The oaks have been milled and the Sarjeant’s project manager Gaye Batty hopes their timber can be used within the extension.

New tree plantings will be included in the landscaping in the later stages of the Sarjeant Gallery development, the council spokeswoman said.