Duo chasing down summer at Sarjeant Gallery in Whanganui

02 Mar Duo chasing down summer at Sarjeant Gallery in Whanganui

Posted at 15:39h in Media Releases by Officer
11 Likes
Share

By Liz Wylie, Reporter at the Whanganui Chronicle 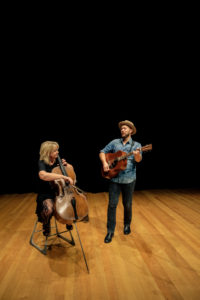 Paula Sugden and Anthony Stretch will play at Sarjeant on the Quay Gallery on March 9.

Singer and songwriter Anthony Stretch has played in a number of bands both in New Zealand and overseas but had decided he works best as a solo performer.

That was before Paula Sugden and her beautiful, 300-year-old cello joined him and his guitar to perform his original songs.

The duo will play at Sarjeant on the Quay in Whanganui next week as a stop on their Chasing Summer tour.

Stretch grew up in a small, rural settlement near Dannevirke learning guitar chords from his Irish grandmother and the “Māori strum” from his dad.

His songs, he says are about “Catholicism, not knowing where you’re going, drinking, and making up your own universe via music.”

His influences are many and varied – from Neil Finn to Neil Young and a whole bunch of soul, pop, rock ‘n’ roll and country artists including Wilco and Lucinda Williams.

“I don’t limit myself to one particular genre because you can miss out on a lot of good music by doing that.”

Stretch’s music has been described as ranging from dark-hearted ballads to roof-raising choruses.

A group of seasoned musicians including Wayne Bell joined Stretch to record his 2017 album Bury All Horses and Bell also produced the album of 10 songs which was widely acclaimed and made the New Zealand Album Charts top 10.

Taking his music on the road, playing venues big and small, the last thing he expected was to find a classically trained cellist willing to tour with him.

“Paula came up to me at a gig and said she would like to accompany me and I was doubtful at first.

“She is used to having sheet music on a stand so it seemed a rather unlikely combination but it’s worked out better than either of us could have imagined.”

Audiences reckon it works too and reviews have described their performances as “jaw-dropping” and “enthralling”.

Stretch also has a day job as an events co-ordinator with the Museum Theatre Gallery Hawkes Bay in Napier and says he is excited about playing at the Sarjeant.

“I have heard that the acoustics in there are absolutely brilliant,” he says.

The Sarjeant Gallery’s relationships officer Jaki Arthur said the concert will coincide with the first day of the 2019 pattillo Whanganui Arts Review.

“Stretch and Paula will be surrounded by the newly opened exhibition of Whanganui artists’ work.

“It will be a great opportunity to see and hear new things at the same time.”