Posted at 12:13h in Gallery News by Officer
10 Likes
Share

What is a better way to celebrate the 125th anniversary of female enfranchisement than with strong and beautiful images of women? 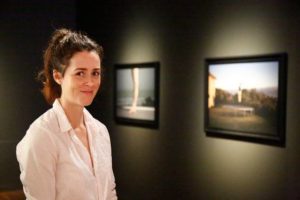 Sarjeant Gallery curators Jennifer Taylor Moore, Greg Donson and Jessica Kidd have assembled an exhibition of 58 works from the collection that focus on women.

The aim, they say, is not to chart the history of women in New Zealand art-making but to draw out narratives that weave through the diverse collection of works that the Sarjeant holds in its care. From the paintings of Whanganui trailblazer Edith Collier to the contemporary photography of Roberta Thornley, the works in the exhibition depict women in a myriad range of settings and moods.

Thornley was artist-in-residence at Tylee Cottage for five months in 2015 and her interest in capturing teenage hood resulted in the narrative exhibition A Serious Girl. The artist met young Whanganui gymnast Millie Manning as she was preparing to travel overseas for training. “I originally planned to work with a group of teenaged subjects but Millie became housebound due to an injury not long after I met her and that became the narrative for my work. Her home and garden in Castlecliff with the constant backdrop of the Tasman Ocean were the settings for my work. The ocean was stretching away in the direction she was headed.”

Thornley said she thought of Edith Collier while working on her series. “Both were young women about to leave Whanganui for the world. Different times and different reasons but similar journeys in many ways.” Edith Collier travelled to London to study art at St Johns Wood School of Art in 1913 and the small exhibition of her portraits of women Edith Collier:Ahead of Her Time is also currently showing at the Sarjeant’s temporary gallery on Taupo Quay. Based in London for the duration of WWI, Collier captured a group of women waiting to offer their labour to the war effort in her painting Ministry of Labour – The Recruiting Office for Women which is the introductory work in the 125 exhibition.

The three curators have each selected works from the Sarjeant collection that fit with different titles they have chosen. Assistant curator Jessica Kidd has chosen the title “Representation” for her selection and the artworks are grouped together in what is known as a “salon hang.” The portraits, a mix of paintings and photographs, span the 125-year time frame yet somehow they look as if they all belong together. Some of the subjects, like late 19th-century painter Kate Sperry portrayed by Gottfried Lindauer, are in profile while Erica, the subject of her husband Peter Peryer’s photographic portrait gaze directly at the viewer. Ida Carey’s Woman Sitting in a Chair gazes down at her hands while the woman in Michael Smither’s Untitled is covering her face with a book. Kidd says female artists were distinctly lacking from the art world when women won the right to vote in 1893 – with only a few exceptions. “Fast forward to today and women artists are not only part of the conversation but as this exhibition aims to demonstrate, arguably more in control of the female image than ever before.” There are a number of examples of artists as subjects in the exhibition and Joanna Margaret Paul features twice in Kidd’s selection. One is her 1970 Self Portrait and the other is Joanna – a 1972 portrait by her husband at the time, Jeffrey Harris.

Another portrait of Paul by Grahame Sidney features in Jennifer Taylor Moore’s section. Curator of collections, Taylor Moore has selected works that depict woman as “Nurturer ” and in the context of “Communities.” Sidney’s portrait, Joanna Pregnant is rendered in pencil and depicts her leaning back in an armchair. “She looks exhausted,” says Taylor Moore. “I think she was pregnant with her fourth child at the time.” Also included in the Nurturer section is Belgian Mother and Child by Edith Collier’s friend and contemporary Frances Hodgkins.

“She was in London with Edith Collier during the first world war and they saw Belgian refugees arrive at the railway station with nowhere to go”. Robyn Kahukiwa’s 1985 painting He Toa Takitahi (He whakatauaki: Ehara taku toa i te toa takitahi, engari takimano, no aku tipuna – (My strength is not individual it is collective) depicts a breastfeeding mother surrounded by figures holding children. Taylor Moore says the proverb eloquently sums up the way women come together into communities working towards a common purpose. Whanganui painter Joan Grehan’s Karamajong mother is a stylised cubist portrait of a Ugandan mother holding a baby on her hip. “Her husband was an ambassador so she travelled and worked in many places,” says Taylor Moore. The Sarjeant has a large number of Grehan’s works in the collection and along with photographer Anne Noble, she is one of the most significant female Whanganui artists since Collier’s time. She died in 2007 having travelled and worked in Europe, Africa, Australia and the Middle East before returning to Whanganui. Noble’s photographs from her series In the Presence of Angels – Photographs of the Contemplative Life captures the daily routines of Benedictine nuns at Tyburn Convent in London.

Curator and public programmes manager Greg Donson has selected the title Narratives for his section of the exhibition. “What links this grouping together is that all the women are playing a role, either real or imagined and they sometimes exist in an uneasy hinterland,” he says. Female strength is celebrated in many of the works Donson has selected such as the 1979 Robin White work This is me at Kaitangata. He says he was challenged about the inclusion of early 20th-century work Portrait of a Lady in a Landscape by Derwent Lees. “People have said the image is unflattering,” says Donson. A woman looms large in the foreground, her bright orange skirt billowing in the wind. “I believe the woman is the artist’s wife Edith Harriet Price and I really like the way she appears to be a giant against the landscape. “She looks ready to take on anything.” The parachute-like orange skirt, he says, would have been considered very bohemian for the time. More than half the works in 125: Celebrating Women from the Collection are by male artists. As the curators have said, the Sarjeant, like most galleries has a lack of gender balance in its collection but the works by male artists demonstrate that there have always been men who celebrate and support women.

Thornley says she feels “hugely privileged” to have her work sit alongside so many artists she admires. After viewing her work at the Sarjeant, I bumped into her subject, Millie Manning, smiling as she served me at the Ambrosia Delicatessen. Not such a serious girl now and gymnastics no longer her main focus but Thornley’s work means that images of that pivotal time may be viewed by a future audience just as we view Edith Collier’s work today.