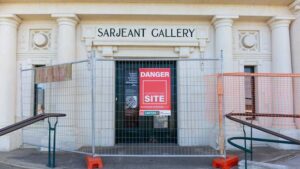 Archaeologist Michael Taylor has no idea how a cannonball came to be on the Sarjeant Gallery site. Photo / File

The discovery of a cannonball during the Sarjeant Gallery extension excavation works has surprised archaeologist Michael Taylor.

The cannonball was found on Wednesday and all work on the Pukenamu Queen’s Park site was stopped while an explosives expert was brought in to remove it. Work resumed on Thursday and the cannonball was sent to Wellington for testing to see if it was live.

Taylor, of Archaeology North which is employed by the Whanganui District Council as part of the Sarjeant Gallery project, said police have confirmed the cannonball is inert.

The location of the find was unusual.

“It’s a bit of a mystery I suppose to what it’s doing here. If you found it in the Rutland Stockade it wouldn’t be so surprising.”

Finding the cannonball is out of context, Taylor said, because families of British soldiers lived on the land for an estimated 20 years.

Taylor said it was exposed by a machine, and then further exposed by workers. Archaeology North was then called in along with police.

“It wasn’t as heavy as you would expect a solid cannonball to be so I figured it was hollow. Then I noticed a protrusion sticking out of it, which was a fuse.”

Taylor believes it is a 24-pound cannonball.

“It is called 24 pounds because of the size, but because it’s hollow it doesn’t actually weigh that.”

“It’s unlike most cannonballs where you think of it as solid.”

Taylor believes the cannonball is more than 150 years old.

He said five 24-pound guns were brought in by General Duncan Cameron in 1865 for use in the invasion of South Taranaki.

“They were taken to the invasion base at Kai Iwi but were left there when the 2000 troops moved into South Taranaki. Why the ball was found where it was remains a mystery.”

Taylor said during excavations they hoped to find household items from people who lived on the land over the years.

“We were primarily looking for evidence of houses and how they lived.”

Taylor said various levelling and ploughing of the land over the past 100 years had “smashed everything into tiny little pieces”.

“There was a big hole of things like barrel hoops, corrugated iron, broken dixies, pot lids and lots of broken spades and shovels.

“They are presumably tools used to do the levelling. Possibly the levelling was done by prisoners who were accommodated at the Rutland Stockade.”