44 oil portraits in Julia Holden exhibition with a difference

Posted at 10:51h in Media Releases by Officer
11 Likes
Share 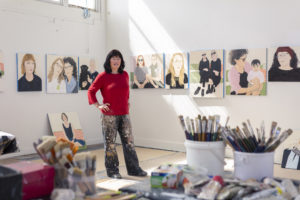 The green couch from the front room of Tylee Cottage is now installed at Sarjeant on the Quay in the project gallery and visitors are invited to sit, look, listen and respond to the new exhibition Julia Holden: Her Indoors. A cream telephone is on hand for those who would like to record their own take on women’s suffrage, which is the theme of Her Indoors. Holden’s exhibition is a suite of 44 oil portraits of 49 women who Holden met last year whilst artist-in-residence at Tylee Cottage.

Messages recorded into the phone will go straight to Holden, who will add them to the Her Indoors audio offering, where they will sit alongside the stories and personal views expressed by the portrait subjects. The Her Indoors audio is available on the online storytelling platform called izi.travel – just search izi.travel and then Her Indoors. The audio adds another dimension that further expands and deepens the exhibition. Listen in the gallery or listen outside, in the world, in your own time. The recordings are personal snippets and make for thought provoking listening.
“I was interested in making this project collaborative and invitational” Holden says.

“Portraiture is a very intimate process. The subject is not a passive object, so it’s not me in control saying ‘this is the way it is’. I can have my ideas but then people bring themselves to it, and in such surprising ways, which is what makes the recordings so interesting.”

Her Indoors began as a sideline when Holden was getting back to oil painting during the residency.

“It was really a little conversation with myself about getting back into the medium [of oils] again but then I found the cottage a little too public while I was figuring out what I was doing and in the meantime I took snaps of my visiting friends. This was a little thing off to the side while I was working on other ideas. But then the idea completely pushed itself to the front of the queue and insisted on getting made, so I had to go with it.

Holden says Tylee Cottage can be seen as a picture of domesticity. “It is the playschool house, with an outline a child might have drawn, a chocolate box house, a picture perfect house I might have aspired to, had I lived in an earlier time.”

Since women gained the vote, their lives and opportunities have changed and yet certain expectations and assumptions remain. Holden is aware of the juggling women have to do to participate in public life.

“Today, what kind of adjustments do women have to make, as artists or in professions, trades and jobs outside the home? Most women artists I know have had to make what can be difficult decisions around their creative life and parenting – these same questions and considerations don’t necessarily arise for male artists. I have so many friends who are amazing Renaissance women and who somehow do it all beautifully and have a thriving creative practice as well. I don’t know how they do it all.”

This article appeared in the Whanganui Chronicle and nzherald.co.nz on 22 Oct 2019